The first story we come across in John 9 is Jesus healing the man who was blind from his birth. The disciples wanted to talk about who was to blame for his being born blind, but Jesus was more interested in doing the work of God and shining the Light into the darkness. Take a look at this quick anime video from Youtube to refresh yourself on the story:

The part of the story that really jumped out to me is that Jesus desired to heal this man, to remove the yoke of blindness, but the man never would have been healed if he hadn't done what Jesus said. Listen to this part again:

"...[Jesus]spat on the ground and made clay of the spittle, and applied the clay to his eyes, and said to him, 'Go, wash in the pool of Siloam' (which is translated, Sent). So he went away and washed, and came back seeing." (John 9:6-7 NASB) 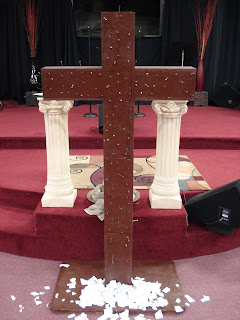 Do you realize that if the man had not gone to the pool of Siloam to do what Jesus said he would have remained in his blindness? He would have died an old blind man with a crust of divine mud around his eyes.

Yesterday was a powerful service at Christian Challenge. I ministered on "Breaking the Yokes" and we provided slips of paper with a picture of an ox-yoke on them. I encouraged everyone to ask the Lord to help them identify yokes on their lives that were holding them back from serving God fully. At the end we brought out the cross we had nailed our "certificates of debt" to in March of last year. (We had taken down the slips of paper, but it still had the nails on it, which ministers to me every time I see it.) I invited people to come bring their yokes to the cross and tear them up, symbolically breaking breaking the yokes, and leave them at the foot of the cross. 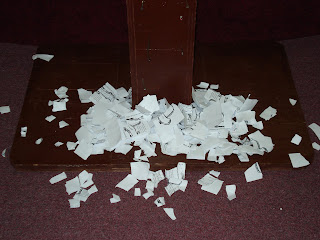 As you can see from the pictures, a lot of healing and freedom took place!

But now's the important part. It's not enough to have the point of contact, which is what that act of tearing the yoke was. Now it's time to DO what Jesus says! For many of us, upon identifying the yoke the Lord will show us what actions to take to break the yoke, to outgrow the yoke. (You'll have to listen to the sermon to understand that point from Is 10:27. Here's how the NIV translates that verse "In that day their burden will be lifted from your shoulders, their yoke from your neck; the yoke will be broken because you have grown so fat.") But if we don't do what He's given us to do, then we'll remain in the yoke.

So what is He telling you to do? What action steps is He calling you to, what changes of habits or routines or thinking does He want you to begin making? Whatever it is, be like the blind man who when Jesus said, "Go" the Bible says, "So he went!"