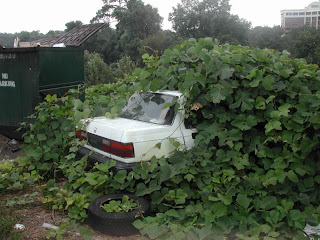 Here in the Southeast there is a plant that was imported from Japan about 130 years ago called kudzu, or "the vine that ate the South". It's called that because it can grow up to a foot a day during the summer! That means the average vine grows over 60 feet per year! And that's just one vine!

Kudzu was first brought from Japan to the US in 1876 and promoted as an ornamental plant and a cure for erosion. However, the hot, humid summers, mild winters and lack of natural predators allowed kudzu to take off like gang-busters. (That a highly technical word for "a lot" [Grin]) Now it's listed as a "pest weed" and costs around $500 million annually in lost cropland and control costs. (Source: Wikipedia) While they help prevent erosion, the vines can also destroy valuable forests by preventing trees from getting sunlight. And they take over EVERYTHING! (Just check out the car in the picture. Yes, that's a car!)

This is what I thought of when I read part of John 12 today. Listen to these verses:

"But the chief priests planned to put Lazarus to death also; because on account of him many of the Jews were going away and were believing in Jesus." (John 12:10-11 NASB)

How do I associate kudzu with these verses? Well, it's actually pretty easy - sin grows! In yesterday's reading we hear Caiaphas, the high priest that year, say, "... it is expedient for you that one man die for the people..." (John 11:50b NASB) Now they've gone from wanting to kill ONE man to planning to kill TWO! All in just one chapter! Sin grows!

This week we've been dealing with the issue of breaking yokes in our lives. On Sunday one of the yokes we talked about that keeps us back from serving God fully is sin. Others included bitterness, selfishness, religion, habits, addictions, etc. There are lots of things that can keep us back from serving God the way we long to. But if we never deal with them, the yoke will actually grow and become more heavy. (I probably should have written "heavier" there - but "more heavy" sounded more ominous! [Grin])

Once you've identified the yokes in your life and brought them to Jesus, it's time to OUTGROW them by doing what Jesus tells us to do. In our Community Groups notes this week I've asked you to share what steps the Lord has given you to deal with them, so that they can help you remain accountable. I hope that's going well for you.

So how about it? Are you dealing with the yokes in your life? Or are they growing? Because they will grow, left untended. And they'll be more than a pest weed. They'll actually consume your life! Let's Deal With It! ... Together! Don't forget to leave me a comment or send me an email about what God is doing in your life! I love hearing from you!

P.S. Here are a couple of other devotional resources you might enjoy from others who are participating in the 21 Days of Consecration (also called "Awakening"):

I stumbled to your site through a Goggle search, and finding a "Pastor Buddy's" blog. This was dated July (6?) 2007. Topic included curse from Talmud for studing book of Daniel. I had only heard of Talmud (at least from my memory) yesterday. I was listing to a professor/pastor on recording from 1974, and believe he is passed away. He mentioned the curse, so I wanted to find it for myself. Thank God, at times like this, for the computer! I would love to know more about this, if there is more to tell.
Blog also mentioned about a team going to a few countries, first Philippines. My wife is from there. Wonderful people!
Thanks. May God continue to bless you.
Randy Roberts
jolly103naawan@yahoo.com

Thanks for commenting. "Pastor Buddy" is my dad and he's a pretty wise fellow and quite the student of God's word. You might enjoy some of his writings at:

He's done a lot of writing on the Hebraic foundations and underpinnings of Christianity.

I was a part of the team that went to the Philippines. We stayed in Cagayan de Oro before going on to Nepal, Pakistan and India. It was a wonderful trip. I found the Philippino people to be incredibly warm and hospitable. (My dad was stationed there in his time in the Navy, late 50's-early 60's, so he has a deep love for them too.)

Thanks again for writing. It was great to hear from you!