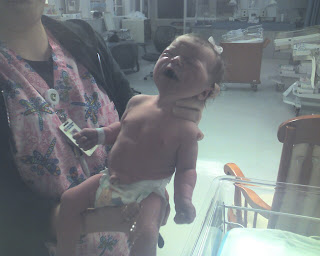 Before I get to my thought for the day I want to take a moment and share something. When the phone rings at 3:30AM it's often not good news, especially when you're a pastor. (You can just imagine!) But this morning the 3:30AM call was good news! Kyle and Heather had a baby!!! Heather worked all day yesterday and through the night and early this morning little Miss Emma came into our world, ready to rule the roost! I'll have more particulars later, but I wanted to pass along this first picture so you can help them celebrate. (BTW, if you plan to visit, please wait until this afternoon as they are ALL exhausted!)

OK, on to my Rambling for the day!

When most folks think of Martha, they think of the story of her being kitchen serving and a little jealous of her sister Mary, who is sitting and Jesus' feet. We hear Jesus' gentle rebuke almost as a swipe against serving and we promise to be more diligent about our quiet time. But if you read the account in Luke 10, you'll see that Jesus was indeed gentle with her, calling her "Martha, Martha" - a way of expressing affection.

However, Martha still gets a bad rap. But as I read today's chapter it seems to me that she is the who believes in Jesus the most. Just listen to a couple of these verses:

"Martha therefore, when she heard that Jesus was coming, went to meet Him, but Mary stayed at the house. Martha then said to Jesus, 'Lord, if you had been here, my brother would not have died. Even now I know that whatever You ask of God, God will give You.'" (John 11:20-22 NASB)

"Jesus said to her, 'I am the resurrection and the life; he who believes in Me will live even if he dies, and everyone who lives and believes in Me will never die. Do you believe this?' She said to Him, 'Yes, Lord; I have believed that You are the Christ, the Son of God, even He who comes into the world.'" (John 11:25-27 NASB)

Wow! That's one of the strongest statements of belief you'll find from ANYONE in the entire Bible. There were 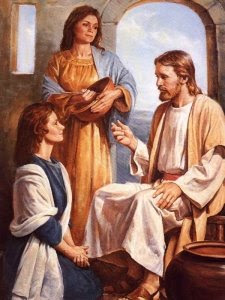 Yes, she did later complain about her sister - she thought she should have been helping her serve the One she believed in to demonstrate her love and belief in a practical way. Jesus gently corrected her, acknowledging her service but helping her see what was truly important. Why? Because He loved her and wanted to help her keep her focus on the right things.

Have we ever gotten a little out of alignment or needed a gentle nudge of correction? If so, let's not make Martha out to be a monster. Instead, let's emulate her faith and belief in Jesus, even in the face of the impossible. And we will see the impossible become a reality!!! (BTW, I picked the picture on the left because I see a hint of a smile on Martha's face and her belief in Him is seen in the way she looks at Him. At least in MY opinion!)

That's it for today! We're on Day 11, which means we've passed the half-way point of our 21 Days of Consecration. If you haven't joined in with us yet, why don't you start today by reading John 11. And share with me the things the Lord is speaking to you. Because,