That brings us up to date. Right now we are waiting for the notification that the adoption is final and then I will travel by bus to Armenia to sign the "sentencia" (adoption decree), making it all legal. Afterwards we'll all fly to Bogota to start the final phase of our journey (medical exams, TB tests, ID cards and passports with their new names, US Embassy visits for final visa approval, etc). That should take about a week. We're hoping to get to go this coming week, which would mean that if we can change our flight back to the states, we could be home for Christmas!!!

Has it been easy? No, it definitely hasn't. Providing 24-hour care for a 4 and 7 year old is tiring, especially for folks who are old enough to normally be enjoying grandchildren for awhile and then sending them home to their parents!!! Anderson's tantrums can be overwhelming and Karen is still processing things, causing her to be withdrawn at times. They have intense sibling rivalry going on and compete for our attention and affection, even though they don't have to. But in spite of all of this, we wouldn't trade it for anything in the world. 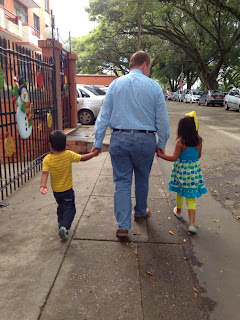 I'm learning how much I'm like Anderson in my relationship with God ... demanding my way, shaking my fist at Him when I don't get my way and pouting when I get the consequences of my wrong actions, as if they were somehow God's fault! And I'm seeing in Karen all the signs of a broken generation that longs for meaning and value, hoping for a relationship with a Father, but pushing Him away at the same time, all the while secretly hoping He will pursue her, and being pleasantly surprised when He does.

All along I knew that adoption would change my life. I just thought it would be more along the lines of freedoms I'd be missing out on or things I would have to give up. But in reality, it's caused me to slow down and enjoy these little blessings from God, reevaluating all the other "stuff" I've filled my life with. I've got another chance to be the dad and husband I wanted to be and I want to make the most of it.

I'm also especially grateful for my church and family's support. Karen and Anderson absolutely LOVE the video-chats with their sisters, grandparents, aunt and cousins (and dog and cat!). And they have loved greeting the church and being hams when we Skype our greetings in on Sundays. They know they are loved and are looking forward to finally getting to the United States! (They ask me every day if it's today!) But let me warn you ... as much as we all thought we were in this to change their lives, I think they're going to change ours! Thank you for being on this journey with us!