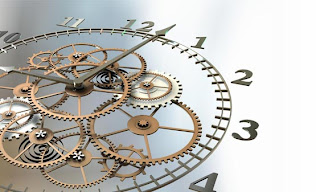 In 1982 I was a junior and the first chair tuba player in the Pineville High School Band. My best friend, John Tabler, was first chair trombone. Together we were a big part of the low brass section, the foundation of the band. We had both decided to transfer to a different school for our senior year and were working up the courage to tell our band director. Finally, the night of our Spring Concert we worked up the nerve to tell him right after the concert. His face was crestfallen and he didn't say much until he said something I'll never forget: "Timing is everything. You could have waited til any other time to tell me this."

The long of the story is that neither of us transferred, we both finished our senior years at PHS, John and his family moved back to Georgia and he went on to bigger and better things. (And you know about me.) But I'll never forget the look on Mr. Clement's face, the disappointment, the hurt that showed. And I'll never forget the way I learned the eternal truth that "Timing is everything."

I thought of that experience when I read the first verse of John 13:

Now before the Feast of the Passover, Jesus knowing that His hour had come that He would depart out of this world to the Father, having loved His own who were in the world, He loved them to the end. (John 13:1 NASB)

On several different occasions John mentions Jesus' time or hour. Prior to now, each time it was to say that it had not come (John 2:4; 7:6, 8, 30; 8:20). But now the hour has come. Jesus had been moving inevitably toward the destiny for which He had come - the cross. That's why He had never feared the crowds or the death threats or the cliffs. His time was in God's hands. He knew that timing is everything.

In our lives we're always in a hurry, trying to rush along to the next outcome, trying to speed up things, wanting to grow faster, mature more quickly, etc. But what peace comes from knowing that our time is in God's hands and His timing is perfect. If we can rest in that assurance, it will bring a great sense of settledness to our souls. Even if we don't see things the way we like them - just hold on, timing is everything.

This even applies to outgrowing the yokes on our lives. Is it possible that the Lord allows certain yokes to remain so we WILL grow stronger and eventually break them by the strength HE provides? Perhaps He is saving our victory for just the right moment? I don't have all that figured out in my head but one thing I do know. Timing is everything! And MY time is in His hands! How about yours?