As this day approached I sensed a little sadness, almost like nearing the last day of vacation. It's been a wonderful journey, a tremendous experience, but what will happen next? Will things go back to their regular routine when we get back to "real life?" I don't want this to end. 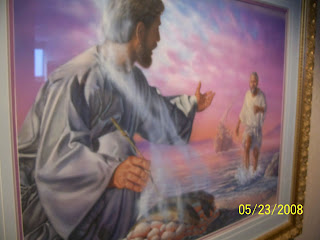 And then I opened my Bible. That sentence tells you all you need to know - for just about every situation in life. As I read the final chapter on the final day of our 21 Days of Consecration, I was captivated by the familiar stories. I saw the tenderness of Jesus calling the disciples "Children" - such a term of endearment. I could hear the grunt of the fishermen as they tried to pull in the net that was miraculously full of fish. I stepped back to avoid being splashed on by Peter as he hurled himself into the water to greet Jesus with such gusto, and yet without his familiar bravado, unsure of his current standing with Jesus, his recent denials still ringing in his own ears.

I sniffed the smell of a charcoal fire with the aroma broiling fish wafting through the morning sun. Oh how thoughtful Jesus was to have prepared a meal for them. Sure they could have cleaned a few of the fish, started a fire, waited for the coals to get just right and tossed them on. But Jesus knew the antidote to their sleepless night was a hot breakfast and cool conversation.

After they finished and were licking their fingers clean, Jesus turns to Peter and asked him, "Do you still think you love me more than these other guys do?" Peter, ashamed that the question even had to be asked, cautiously replied, "Lord, You know how much I care for you." No more bravado. No more boasting. No more comparing himself to others, holding himself out as the example of a leader. Just "You know."

Expecting a harsh reply, perhaps a quick correction, instead he heard Jesus remind him of why He had called him in the first place. "OK, Peter. Remember to feed my little lambs that are so precious to Me."

What? That wasn't the answer he was expecting. Where was the stern rebuke? Where was the harsh reply? Where was the public humiliation in front of his peers? "I don't deserve this kindness," he thought. "I deserve to be put down, laughed at, thought poorly of by those who know my betrayal so well." 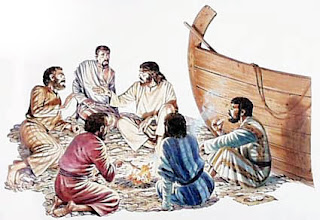 Another question interrupted the tangle of thoughts racing through his mind. This time not a comparison to the others, just a simple question: "Peter, do you love Me?" Unable to use the same word, "love," that Jesus had used, and not sure where He was going with this - still expecting the other shoe to drop, Peter haltingly responded, "Yes, Lord. You know that I really care for you."

A pause. A hesitation. "Does He doubt what I'm saying? How can I say I care for Him when I abandoned Him so quickly?" But before the thoughts could untangle Jesus' voice cut through like a spear, "You've got to take care of my sheep."

"How can He trust ME to take care of His sheep? I don't understand. I failed Him! I abandoned Him! I denied Him! I cursed Him! HOW CAN THIS BE?"

As the echoes of condemnation faded he heard the clear voice of Jesus softly and slowly rise through the mist of his tortured mind, "Peter, do you care for Me?" He could stand it no longer, a torrent of shame and guilt rushed from His mouth. All his hopes and fears, expectations and disappointments came tumbling together. There was nothing left. He was bare. He was empty. It all came out at once.

"OH LORD! You know everything! There's nothing you don't know. You know the deepest places of my heart. You know my failures and my self-loathing. And through all this you know that I truly do care for You!"

There. It was out. No hiding. No shifting blame. He hated himself for failing. ... But he still loved Jesus. He couldn't bring himself to use the same word Jesus had used, but Jesus had brought it down to his level. And he told Him everything. Nothing was hidden. It was all out in the open for all to see.

Jesus went on to talk about his future, to tell him that his journey wasn't over, that no matter how big the failure, there was much journey left to be had. There was an ending point to the journey, but this wasn't it. And in the meantime, he didn't have to worry about others, what God was doing in their lives or how God wanted to use them. He just had to follow Jesus. If God wanted to do greater things in the lives of others, that was ok. He was going to follow Jesus. Because the journey continues!

This chapter ends with this statement:

Jesus also did many other things. If they were all written down, I suppose the whole world could not contain the books that would be written. (John 21:25 NLT)

There are many more chapters to be written, many more miles to travel. This journey that we've been on has not come to a close, only one leg of it. I don't know what tomorrow holds. But I know the journey continues. Will you travel with me?

Such an excellent closure to this series in that it leaves it WIDE OPEN for each day after this, this isn't so much a stone marking the end of something as it is the marker of a new life style. A purging and renewing. Sort of. To me at least.
I needed this.
God is doing things in mine and jessicas life like you wouldn't believe. we're relearning alot of things that I'm wishing we hadn't forgotten. Mostly on my end. I can be such a faliure in so many ways, to her, to you, to the Lord, which is why I think this partiular part of Peters story has always struck me deeply. Yes, i have much searching to do with myself and the parts of me that I loathe (and there are plenty) but to know that Gods unfailing grace is such rich relief is all I need. As always, the Lord has used you mightily in my life, and your surgical precision and leadership has helped me so much more than you could ever know. How could you know 21 days ago that I would need to read that chapter today as much as I did? Thank God for a pastor and friend like you.
enough of this book, you always tell me not to tell you but to show you...so here goes.

Thanks for the comment, Jon. Wow - you let it all out there, just like Peter. Thanks for sharing and for your transparency. I'm glad you're relearning some things. I've had to rererererererelearn a few things in my life so hang in there. I'm glad you're a part of my life. Really. And I'm looking forward to what's next.

Hey Nathan, Enjoyed this outlook and some perspectives I've never caught on to before, stood out. Thanks for sharing what He has taught you. Christina Gallegos

Thanks, Christina! It's so great to hear from you! I sure love and miss the Gallegos clan - so glad to hear how God is using y'all in San Antonio!!!