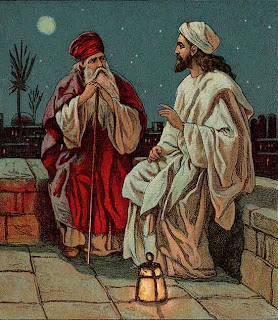 Have you ever stayed up late with a friend, talking into the wee hours of the night? Those are the conversations we seem to cherish the most from our friendships. That's when real heart exchange takes place. That's what came across my mind when I began reading John 3 today. Listen to the first part of this chapter:

There was a man of the Pharisees, named Nicodemus, a ruler of the Jews; this man came to Jesus by night and said to Him, "Rabbi, we know that You have come from God as a teacher; for no one can do these signs that You do unless God is with him." (John 3:1-2 NASB)

I've often read of Nicodemus' coming "by night" as a sign of fear. But maybe he wanted to have a long talk, which would have been difficult in the daytime with the crowds around Jesus. And this late-night conversation affected Nicodemus in a tremendous way. He appears two other times in the Gospels, one when speaks out in Jesus' defense when the rest of the Jewish leaders wanted to arrest Him (John 7) and then later when he assisted Joseph of Arimathea in burying Jesus, personally providing a costly sum of spices for the burial. Early Christian tradition says that he was a strong believer and was martyred for his faith in Jesus.

I believe the Father wants to have those kind of "late-night" conversations with us, even if they don't happen late at night. But it's the kind of heart-sharing that takes place when we commit to consecrate our lives to Him, giving Him the first place in everything. This journey of consecration that we're on will bring us to many late-night-type conversations as we seek to find time with Him alone, away from the distractions of life, the hustle and bustle of the crowds. That's when the most intimate, life-changing truths will be shared.

So how about it? What truths is He sharing in your life? What kind of life-exchange is taking place on this "21 Days of Consecration" journey that we're on together? I'm loving your emails and phone calls - keep 'em coming!