We've reached Day 7 of our "21 Days of Consecration". For those who are fasting, you're 1/3 through by the end of the day. Hang in there - you're doing great!

As you'll recall our focus during these 21 eays is on the ABC's of Consecration: Spiritual Alignment, Breaking the Yokes and Setting the Captives Free. This first week has all been about Spiritual Alignment. From what I'm hearing from you, the Lord is doin 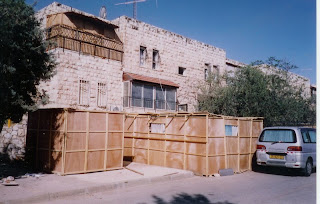 g some significant spiritual alignment in all of us, which brings me to the verse I want to highlight today.

The fall had arrived and with it cam the Jewish feast of Sukkot, also known as the Feast of Tabernacles or Booths. To commemorate their 40 years of wandering in the wilderness, the Jews would built huts or booths to live in outdoors during this 7-day feast. If they lived in the land of Israel they would travel to Jerusalem and built their booths there. (The picture at the right shows modern day sukkas on a Jerusalem street and apartment balcony. Photo courtesy Wikipedia.)

Jesus' brothers, who were not believers at that time, wanted to prod Him into taking his "road show" to Jerusalem, to be seen publicly by the whole land. I don't know if they thought that would put an end to their Brother's eccentricities or what, but Jesus knew better than to succumb to their manipulative pressure. However, they did say something very interesting that goes to the issue of alignment we've been focusing on. Listen carefully:

"For no one does anything in secret when he himself seeks to be known publicly. If You do these things, show Yourself to the world." (John 7:4 NASB)

Unwittingly they had told a truth about motives of the heart. They just didn't understand 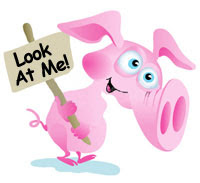 Jesus' heart. They thought He was doing all these things to seek publicity, to draw attention to Himself! They thought he was an "attention-hog." Everyone remembers the PE classmate who never passes the ball to anyone - we called him a "ball-hog." Well an attention-hog is someone who always somehow weasels their way to the center of attention. You know the type, the kind that always has a "me-too" story for every experience that's shared. (I could also name a few celebrities here, but I'll leave it to your imagination!)

This brings up a great alignment question - how many of our "religious activities" are because we're "seeking to be known publicly?" Jesus refused that temptation. He did things only to please the Father. This is a great motive-check, a great heart-check. "Why do I do the things I do?" If I'm doing them to draw attention to myself, then I'm no better than the hypocrites Jesus described in Matthew 6, whose only reward would end up being the attention they received.

So as we end the week of focusing on Spiritual Alignment, let's ask ourselves this question, "Why?" Why do I sing on the worship team, mow the church yard, give, teach Sunday School, lead a small group, clean the church, work on the hospitality team, lead in Awana, volunteer my time, treasures and talent? I think most of you would say you're doing it to change the lives of others and to honor the Lord. And that's the right reason. But if any of us find that we're doing any of these things "to seek to be known publicly," it's time for some more Spiritual Alignment!

Well, that wraps up Week 1 of our "21 Days of Consecration" and I'm loving it! Tomorrow I'll be ministering on Breaking the Yokes and I can't wait to see the Lord sets us free from yokes that have kept us back from serving Him wholeheartedly! 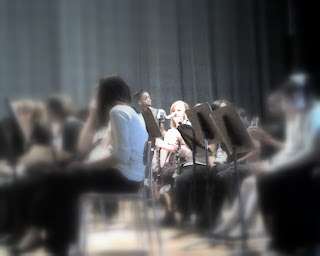 Before I leave, I just have to brag on one of my daughters a little bit. Hope tried out for the Rapides Parish Junior High Honor Band and got 2nd chair in the bass clarinet section! (She's the one highlighted in the middle of the picture. Sorry for the bad quality but I forgot to bring a REAL camera so all I had was the one on my cellphone. I used Picasa 3 from Google to make the blur so she'd stand out a bit.) They sounded GREAT! Congratulations also to Joseph Carrier (Trombone) for making the Junior High Honor Band and to Brandon Dorsey (French Horn) and Jacob Mott (Bass Trombone) for making the High School Honor Band. You guys are AWESOME! And it was great to see your families there supporting you.

Well that's it for this update. I hope you reading enjoying them as much as I do making them. Please feel free to email me or leave me a comment on the blog to let me know what God is doing in your life during these 21 Days of Consecration. I'm loving the feedback I'm getting. And most certainly...