This past week I was leading another trip to the Benito Juarez Children's Home in Reynosa, Mexico, and I hope you enjoyed the guest post from Debbie McBride. I deeply appreciate her vulnerability and willingness to share an authentic picture of the struggle many young mothers share, as well as her invitation to be a sounding board and support for moms going through similar circumstances. Based on the feedback I received, her guest post struck a nerve!

I wanted to use this week's post to share about our recent trip to the Benito Juarez Children's Home, founded in 1967 by Don & Opal Russell. (The were also the founders of the King's Way Missionary Institute in McAllen, TX, where I learned Spanish before being a missionary in southern Mexico from 1986-1990.) I first visited the orphanage in 1984 as a student at King's Way and volunteered some of my time there during the year and a half that I lived in McAllen. In the 1990's I took a few groups of our youth down to visit the orphanage, but in 2003 we started visiting and supporting on a regular basis. We have lost track of how many trips we've made to the orphanage since then, but it's been an integral part of our missions activity for the past decade plus. 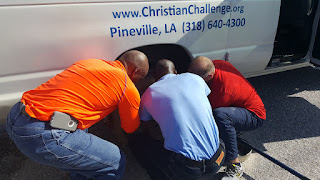 On Sunday, June 5, 29  people from 6 churches loaded into 3 vans for 1 purpose - to love and serve the children and staff of the Children's Home. It wasn't long before we experienced what has become a routine occurrence for us on mission trips - a flat tire! And worse than that, it was one of our brand new tires, not even a week old! But with an amazing support team we got the spare on in no time and later discovered the problem was the valve stem, not the tire. God blessed us that we had caught it before the tire was completely deflated, so there was no damage to the tire. And back on the road again! 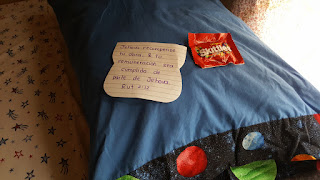 We spent the night in a hotel in Refugio, TX, and were in McAllen by noon for lunch with Mark Russell, son of the founders, who is the now the director of the children's home. After picking up a few last minute supplies, we made an uneventful border crossing and made our way down the quickly deteriorating roads to our destination. (Most heard comment: "And I thought LOUISIANA had bad roads!") The children were in school but quickly piled out of the current school building to welcome us with hugs and excited laughter! What a reunion! They had also prepared something special for us - on every bed was a small bag of candy and a hand-written Bible verse in Spanish that spoke of God rewarding our work. It was a beautiful gift that touched every member of the team.

Normally the day we arrive is spent unpacking, settling in and playing with the children. But we had several men on this trip who came ready to work, and within an hour of arriving, they were already on the site of the new school, assessing the needed work, and jumping right in to "get 'er done!" These next few pictures show some of the crew working to level the fill-dirt to prepare for concrete while others started laying blocks! 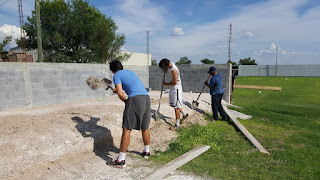 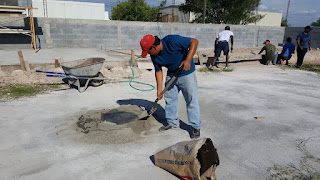 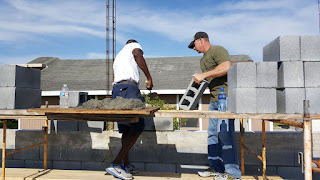 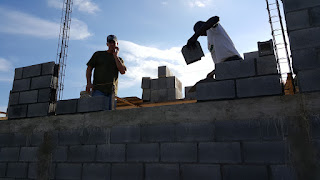 Meanwhile, the youth had gathered up all the children and while some were playing games, others were worshiping in a circle outside the children's dorm. It was evident this was going to be a special trip!

That night we had supper with the children and played with them until dark, and then gathered in the chapel for our nightly team devotion. Then it was off to bed so we could get up early the next morning for daily morning prayers and worship with the children before breakfast. Each day members of our group brought devotions and led worship before we gathered in a big circle and prayed for the topic of the day (government, other children's homes, supporting churches, etc). After breakfast, some of our team helped clean the kitchen while the work crew headed back to the school site and the rest of the team played with the children. And since the children are what this is all about, they had the most important job of all! :) 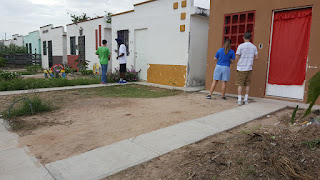 That afternoon we had an opportunity to do something new. Due to recent violence in Reynosa, our teams have not ventured off campus for the last few years. But this year, with Mark's permission, we brought 200 Spanish New Testaments, donated by the Gideons, and passed them out door-to-door in the nearby neighborhood. We had several "God-moments" when we know the Lord had created divine appointments for us to share the Gospel and pass out His Word. The team did a terrific job!

Just as we were finishing up with the Bibles a nice rain shower descended on us. It was refreshing but heavy enough that we took refuge in a convenience store and bought some cold drinks while the rain passed. Back at the children's home, the workers saw the dark wall of rain approaching and just when they thought they would have to abandon the work, it stopped! It rained just enough to refresh them and the clouds blocked the beating rays of the sun, but they never had to stop working! Later that afternoon I took the church van to a mechanic to get the AC worked on and found that just half a mile away it had rained so much that the streets were flooded and cars were stalled out! God had refreshed us with the rain but prevented it from stopping our work! 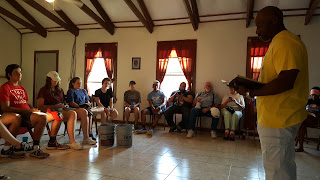 Wednesday night was very special to our team. After another long day of working on the school, we knocked off early enough to get showers before supper and then retired to the chapel for our team devotion while the children had their after-supper bathing time. Darrell Carter from our team brought an amazing devotion entitled "How do you go through the fire when you keep requesting to get out of the flames." It was quite challenging and thought-provoking!

The Mexican workers at the children's home had asked to meet with us after our devotional time and to my surprise they announced that they wanted to wash our feet! They shared that on a previous trip, my wife had ministered to their ladies by giving them massages, including foot massages, and they wanted to minister to us by washing our feet. I was so broken as I sat there - all I could think is, "We should be washing YOUR feet! You are the heroes! We come down here a couple times a year but you are here day in and day out loving these children, serving them and showing them the way to Jesus!" After they were finished and we had prayed and hugged and they left, our team stayed for another hour-and-a-half praying, confessing, sharing struggles, and interceding for our loved ones who don't know Jesus! It was a highlight of the trip! 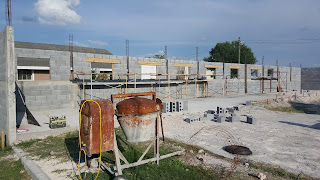 Thursday was our last workday and the team determined to finish the project they had started. While some of our team continued working with the children, doing crafts and Bible lessons, the rest of the team worked hard to finish laying the block, build forms for the headers over the windows, build the metal cages that go in the forms to hold the concrete together, mix the concrete and finally pour it into the forms to create the header. While earlier in the week it didn't look like we would get that far, that afternoon  the final header was poured and just before supper the final block was laid! MISSION ACCOMPLISHED!!!

The final night at the orphanage is always very special as the children typically have prepared "choreographies" (dances or "human videos") for us, and we have a very special time of sharing - and this trip was no different. After the choreographies, we gathered around a bonfire outside as Julio presented each person with a small piece of wood and encouraged us to, by faith, place our sin, our struggle, our doubts, our fears, etc onto that piece of wood and then toss it into the fire as an act of faith. It was a moving time, especially when Allison McCloud led us all in singing "We are the light of the world" in the light of the bonfire. Then we retreated back inside from the mosquitoes and had a time of sharing our goodbyes. This is the hardest time of the trip for me personally as I translate both for our team into Spanish and for the children and workers into English. The love that is shared is very real and there are very few dry eyes in the place.


We arose EARLY Friday morning to pack the trailer, clean out the dorm and say goodbye to the brave souls to woke up before dawn to see us off. Then we headed to the border and met Mark for breakfast in Pharr, TX, before driving to Progreso, TX and leaving our vehicles stateside, walked across the bridge to do a little souvenir shopping. That night we made it as far as Houston and then back to Pineville the next day, tired, road-weary, but with very full hearts. 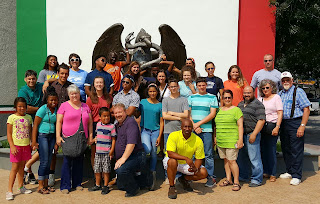 I'm especially proud of this group and all the folks who went with us. This is the largest group I've ever led, and while it had its logistical challenges, the team members were wonderful and very flexible! We had 10 from Christian Challenge, 8 from Good Hope Baptist Church, 7 from New Life Community Church, 2 from Philadelphia Baptist Church and 1 each from Greater New Hope Baptist Church and River Outreach Center. And I'd take every single one of them back again in a heartbeat!!!

I've posted more pictures on my Facebook page, along with some commentary. Please feel free to take a look at them to celebrate all God has done! Also, please pray for the workers and children at the Benito Juarez Children's Home in Reynosa. That's a very special place and the love of God is evident there. But that region is wracked by drug-war violence and turf battles between drug cartels, and the emotional strain is evident. The children's home has never been in direct danger, but the workers have occasionally been near shootouts or raids when they've traveled through parts of the city they don't allow us to visit. So keep them in your prayers. And pray about visiting them with us one day! Don't worry, we won't go anywhere near the "hot spots" - but we will go near the heart of God when we love the children in Jesus' name!
Posted by Nathan Martin at 6/15/2016 04:05:00 PM