Who's the April Fool? 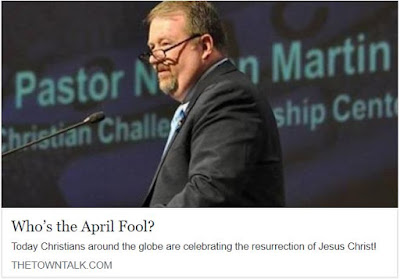 (This column originally appeared in The Town Talk on Sunday, April 1, 2018.)

My daughter Hope absolutely loves April Fools' Day! It’s like a national holiday to her because she loves to pull pranks. Over the years we’ve learned to be on our guard around her this time of the year as you never know what she’s got up her sleeve!

A couple of years back she called me, telling me between sobs that she had gotten into an accident on her way back to a college class. After asking if she was ok and then checking the status of the people in the other car I told her to wait right there, that I was on my way and that everything was going to be OK.

That’s when she exuberantly declared, “April Fools!” Boy did she get me good! My heart was pounding and it took me a few minutes to get my blood pressure down before I was able to laugh at her most recent success in pranking me.

Today, April 1st, Christians around the globe are celebrating the resurrection of Jesus Christ! Due to the way that Easter is calculated (the first Sunday after the first full moon on or after the vernal equinox – thanks Council of Nicea!) the date changes each year, and for the first time since 1956 this year Easter falls on the first of April. But that’s not the April Fools’ prank! More on that in a minute!

The Resurrection of Jesus is a big deal! This is the core belief of Christianity – whether you’re Catholic, Protestant, Orthodox, or any other flavor of Christianity, we all believe in the resurrection! That’s what makes us Christians! This historical event had over 500 eye-witnesses (1 Cor 15:6), not one of whom ever recanted their testimony, even under penalty of death. And it stands at the center of our faith.

The core belief of Christianity is that God took on human flesh (John 1:14), was tempted in every way that we are (Heb 4:15) yet lived a sinless life (1 John 3:5). He then died on the cross to pay the penalty for our sin (2 Cor 5:21) and His resurrection is evidence that we have been justified before God (Rom 4:25).

But in addition to those marvelous doctrinal truths, the Resurrection is one of the best April Fools’ jokes ever played, because it was played on the devil!

For quite some time Satan had been plotting to kill Jesus. He had failed to distract Jesus from His mission in his earlier temptation in the wilderness so he waited “for a more opportune time” (Luke 4:1-13). All the while he was influencing the hearts of his hypocritical children who were in positions of religious leadership and they plotted to bring an end to this young upstart Rabbi.

Then Satan played his most strategic card by entering the heart of Judas Iscariot, one of Jesus’ trusted companions. Somehow he convinced him to betray Jesus. I’m sure Satan must have chuckled with evil glee as he saw Jesus arrested, convicted, beaten, and ultimately crucified.

Satan’s plan through the ages had been to destroy the promised Seed of the woman (Gen 3:15). He tried to do it in Egypt by having Pharaoh kill the male Hebrew children. He tried again around the time of the birth of Jesus by having Herod kill all the male children under the age of 2. But now he had finally succeeded! How he must have celebrated as Jesus’ lifeless body was lowered from the cross and laid in a borrowed tomb. The serpent had bruised His heel as the earthly walk of Jesus came to an end.

When Adam disobeyed God, Satan had been granted certain authority on the earth. And for thousands of years he had wielded the power of death over fallen mankind. But little did he realize that it was through death itself that Jesus would render him powerless! (Heb 2:14)

Early on Sunday morning, to Satan’s surprise and chagrin, a “severe earthquake” ripped through that region and “an angel of the Lord descended and rolled away the stone” (Matt 28:2 NASB). In grand fashion all of heaven witnessed the empty tomb declare that Satan had been played for a fool!

In Paul’s first letter to the Corinthians he declared that if the rulers of this age had understood God’s eternal wisdom “they would not have crucified the Lord of glory” (1 Cor 2:8 NASB). It’s almost as if they were tricked into accomplishing God’s purpose!

When Jesus was raised from the dead His body still bore the marks of Satan’s bruising. But ultimately the Resurrection was the final crushing of the head of the serpent of old (Gen 3:15). And today Satan remains the April Fool!

The only question that remains is who else is the fool? In Psalm 14:1 David wrote that “the fool says in his heart ‘there is no God.’” But the Resurrection provides a remedy even for the foolish heart! The New Testament declares “that if you confess with your mouth Jesus as Lord, and BELIEVE IN YOUR HEART THAT GOD RAISED HIM FROM THE DEAD, you will be saved.” (Rom 10:9 NASB)