Keep Calm and Plod On 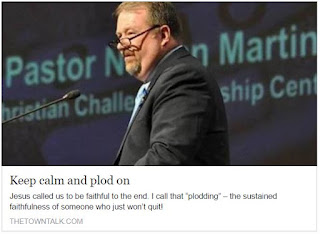 Aesop was a Greek storyteller who lived about 600 years before Christ. You’ve probably heard of “Aesop’s Fables,” stories that use animals to communicate great truths. Some of the more well-known examples include “Boy Who Cried Wolf,” “Goose that Laid the Golden Eggs,” “Wolf in Sheep’s Clothing,” among others.

Aesop was also known for coming up with some pretty tweetable quotes, like “After all is said and done, more is usually said than done;” and “It is easy to be brave from a safe distance.” One of my favorites comes from his story of the Tortoise and the Hare: “Plodding wins the race.”

You might remember this story of the boastful hare who challenged the tortoise to a race, confident that he was the fastest animal in the jungle. But the tortoise ended up winning because although the hare started well, in his arrogance he decided to take a nap thinking he could easily win. The tortoise simply plodded towards the finish line, crossing just ahead of the desperate hare whose flashy, yet intermittent speed couldn’t overcome the slow and steady pace of the tortoise.

“Plodding wins the race” was the moral of Aesop’s fable and is a lesson to Christians today as well. Some folks may start out well on a journey of faith, but how you start is not what wins the gold medal – it’s how you finish! Jesus told His own parable of seed that was sown. Although most of it sprang up quickly, not all of it became fruitful. Persecution, or temptation, or cares of the world stunted the growth and prevented the harvest. (See Matthew 18, Mark 4 and Luke 8 for the full treatment.)

Jesus called us to be faithful to the end. I call that “plodding” – the sustained faithfulness of someone who just won’t quit! And there are some secrets that the plodder knows about walking with God.

First, the plodder knows that every step counts. Every faithfulness counts. Every obedience counts. The plodder knows that every step matters. He doesn’t quit just because he doesn’t see immediate results. He doesn’t stop just because the seed he sowed 5 minutes ago hasn’t already born fruit. He recognizes there is a cost involved and the journey of a thousand miles starts with a single step – and then has many, many more steps after that first one!!!

The plodder also knows that “this, too, shall pass!” No pain, no matter how intense, lasts forever! As David proclaimed, “Weeping may endure for the night, but joy cometh in the morning!” (Ps 30:5 KJV).

Finally, plodders also know that the prize is worth the plod! This is the plodder’s ultimate weapon! He recognizes that the “momentary, light affliction,” no matter how heavy and seemingly long lasting, pales when viewed in the light of the “eternal weight of glory far beyond all comparison.” (2 Cor 4:17-18 NASB) The plodder knows that what’s across the finish line is worth whatever the cost to get there!

This is why it’s so important that we keep our eyes on the prize. Or as the Bible writer said, “Fixing our eyes on Jesus, the author and perfecter of faith” (Heb 12:2 NASB). That passage says that Jesus “endured the cross” because of the “joy set before Him.” Jesus Himself was our example in setting His eyes on the prize. And so must we!

It’s imperative to keep God’s vision for your life, God’s calling, in view. When we lose sight of God’s vision we stop plodding and start trudging. But when we hold onto God’s plan, our steps have purpose and we can “Keep calm and plod on!”