After the Resurrection, Now What? 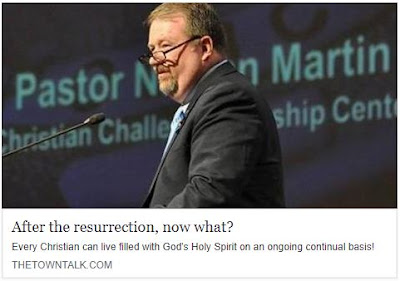 (This column originally appeared in The Town Talk on Sunday, May 6, 2018.)

Last month Christians around the globe celebrated the resurrection of Jesus Christ. This is the central tenet of Christianity. No matter what branch or what denomination, all Christians agree on this common belief, that Jesus Christ died on the cross for our sins, was buried, and rose again to never die again, securing our salvation eternally!

Without a doubt, the resurrection of Jesus distinguishes Christianity from all other religions in the world.

But what happens after the resurrection?

That was the dilemma faced by the apostles themselves. They had seen the risen Christ on several occasions. And He had taught them over a period of 40 days (Acts 1:3), opening the Old Testament scriptures to them to show them how He fulfilled the prophecies (Luke 24:45). And He told them that they were to go into all the world to teach all the nations the very things He had taught them (Matt 28:18-20).

And then, He told them to wait!

That almost seems counter-intuitive! He gave them a Great Commission to change the world, to tell the greatest story ever told, but then He said to wait! What were they waiting for?

That power source was His own Holy Spirit who would now live in them! It was prophesied throughout the Old Testament that God’s presence would one day not just rest on special individuals (prophets, priests, kings, etc) but would be poured out on all flesh (Is 40:5; Joel 2:28-29; Ezek 36:27, etc)!

And so it was that on the 50th day after the Resurrection that God fulfilled the prophecies and poured out His Spirit on all who believed! The Church was birthed in a moment, and all who believed received this precious promise to be baptized by God’s Spirit into the Body of Christ (1 Cor 12:13)!

So what’s after the resurrection? We have the command of Jesus to tell His story in the power of the Holy Spirit! And the good news is that God’s Holy Spirit can fill us every day! That’s why Peter wrote to the Galatians that they were to be continuously filled with the Holy Spirit! (See the original Greek of Eph 5:18.)

Every Christian can live filled with God’s Holy Spirit on an ongoing continual basis! As we worship Jesus in community (Eph 5:19), develop an attitude of gratitude (Eph 5:20) and seek to live in right relationship with others (Eph 5:20), we will find ourselves filled with less of us and more of Him!

That’s my goal, to live filled with the Spirit every day that I might be empowered by Him to tell His story. How about you?