A Tale of Two Basins 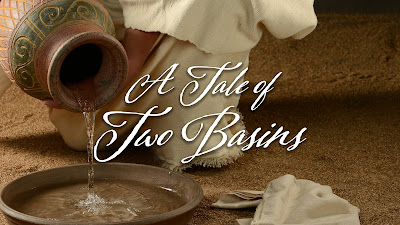 The world recognizes this time of the year as a time to celebrate Jesus’ death, burial and resurrection. The events of Holy Week are so familiar to us that it’s easy to miss out on some of the details. So today, I want to draw your attention to two events that center around two basins of water.

“Jesus, knowing that the Father had given all things into His hands, and that He had come forth from God and was going back to God, got up from supper, and laid aside His garments; and taking a towel, He girded Himself. Then He poured water into the basin, and began to wash the disciples’ feet and to wipe them with the towel with which He was girded.”
(John 13:3-5 NASB)

Notice that it says Jesus “got up from supper.” This could indicate that the meal wasn’t finished yet. I could imagine that everyone was still enjoying themselves at the table, maybe finishing their meals and engaging in conversations with each other. Then Jesus quietly arose, preparing to teach them a great lesson.

He “laid aside His garments.” To me this is a clear reference to the incarnation! He laid aside His glory and dignity as the Son of God to perform a servant’s task. The passage continues, “taking a towel, He girded Himself. Then He poured water into the basin...” This was the work of servants. Remember the wedding at Cana when servants filled containers? Everything Jesus did pointed to Him doing something He didn’t have to do.

Next, he “began to wash the disciples’ feet.” This is the ultimate in service. The role of washing feet was ALWAYS an act of service performed by those of lesser status for the benefit of those with a greater status. Interestingly, the Babylonian Talmud tells us that in Jewish tradition, although disciples were called upon to show great respect to their teachers/masters, one thing that explicitly was NOT required was to unloose the shoe (in order to wash the feet). That shows just how much Jesus humbled Himself to do this task.

When Jesus washed the disciples’ feet, it wasn’t enough to just wash them with water, He also wiped their feet with the towel he was wearing, providing the ultimate cleansing and care. It’s also important to recognize that Jesus didn’t exclude Judas. He washed ALL their feet.

“So when He had washed their feet, and taken His garments and reclined at the table again, He said to them, ‘Do you know what I have done to you? You call Me Teacher and Lord; and you are right, for so I am. If I then, the Lord and the Teacher, washed your feet, you also ought to wash one another’s feet. For I gave you an example that you also should do as I did to you.’”
(John 13:12-15 NASB)

Even though Jesus had performed this act of service, He was still their Master to instruct them and their Lord to rule or govern them. The world may think less of you if you perform low-status service jobs. But in the economy of God, you gain - not lose - when you serve someone else.

Jesus instructed His followers to wash one another’s feet. He didn’t say that in order to institute some sort of foot-washing ritual. The idea is to lay aside any false ideas of our own greatness and learn to serve one another... to prefer others in even (or especially) in the small things. To build someone up when you’d rather put them down. To resist the urge to use your influence to call out or punish someone who has wronged you… and serve them instead. 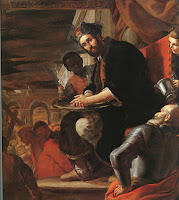 “When Pilate saw that he was accomplishing nothing, but rather that a riot was starting, he took water and washed his hands in front of the crowd, saying, ‘I am innocent of this Man’s blood; see to that yourselves.’”
(Matthew 27:24 NASB)

Pilate was quite a piece of work. His 10 years in Jerusalem were marked with many instances of unrest and bloodshed. Once he intentionally antagonized the Jews by placing golden shields in his palace with the names of various gods. Emperor Tiberius had to personally order him to remove them. He took money from the Temple treasury to build his aqueduct. He would send his soldiers into crowds of protesters dressed as civilians and when the crowds got unruly, at his command, they would begin beating the protesters. Philo called him “naturally inflexible, rigid, and self-willed”.

But this time he is no match for the Jewish leadership. He can see something in their eyes. He knows they’re serious, like the time they bared their necks to the Roman swords to get the soldiers to remove their shields from the temple. He backed down that time and he’s backing down again. He’s the ultimate politician. He knows which battles to fight and this isn’t one of them. 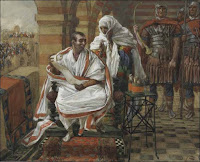 Pilate’s wife didn’t want to see Jesus condemned. In Matthew 27:19, she is so distressed over what’s happening that she sends her husband a message while he was on the judgment seat. In other words, this is so important to her that she interrupts him during a very important meeting at work. Her influence surely must have meant something to Pilate - but not enough to get him to release Jesus.

It’s not inconceivable that Pilate, because of his position, was close to people on both sides of the Jesus controversy. No matter which side he chose, he would lose supporters… so he chose not to choose, washing his hands of the matter. Sometimes refusing to take sides can be much more telling than actually choosing one and defending it.

Unlike Jesus, Pilate isn’t interested in serving. He’s interested in making himself look good. So instead of reaching for a towel, he reaches for the title. He calls for a basin, but he doesn’t fill it himself. And instead of washing someone else’s feet, he washes his own hands. Instead of being focused on others, he’s focused on himself.

WHAT’S IN YOUR BASIN?

Are you more like Pilate or more like Jesus? This is a serious question, and note that I’m not asking which one you’d rather be like. We’d all rather be like Jesus! But in the rubber-meets-the-road world of our daily lives, who do we take after more? I want you to ask yourself the questions that differentiated between the two basins: Are you concerned with service or appearance? Are you looking for a Towel or for a Title?

Living like Pilate is about watching out for your own interests above the interests of others. It’s about making strategic decisions and being careful about appearances. It’s about taking advantage of your influence to secure your own position, even at the expense of others.

Jesus said He came not to be served but to serve. He proved that on the cross. He emptied Himself, laying aside His glory, and did the dirtiest job of all... dying for our sins. And now He calls us to follow in His footsteps.

The challenge is will we know it or will we do it? Unfortunately, sometimes even true Christians know more than they’re willing to do. The Greek tense is “you are blessed if keep on doing them.” Will we make service to others a lifestyle? If we are to make an impact for Jesus as His followers and imitators, we must do what He did. He practiced service as a way of life. It must be so for us as well. Which basin will you choose?
Posted by Nathan Martin at 4/13/2017 11:40:00 AM