The Lost Art of Reverence 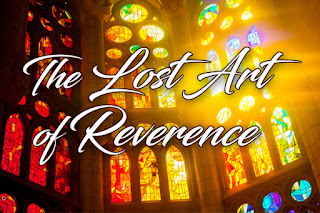 Last week in my post about Pokemon Go, I mentioned that some places that had been designated as PokeStops really didn’t want to be PokeStops. Memorials and museums like the National Holocaust Museum had to ask users to refrain from playing the game at their location, especially after screenshots started showing up online. And based on the feedback that news articles about the controversy received, the majority of people agreed that it was inappropriate to play games in that setting. Some even expressed disgust that players were brazen enough to post their screenshots.

This story struck a chord with me because lately, I’ve been thinking about how little reverence there seems to be... for just about anything! It’s apparent when we look at the news. It’s blatant in popular entertainment. I see it every day on social media. And unfortunately, it’s also true in the Church as a whole. I believe we’ve lost touch with what reverence is all about.

When I hear the word reverence, I think about a sense of awe, a deep respect and appreciation for something significant. In the context of the Church, I think about a “holy hush,” a quietness, a humble recognition of the sacred. Definitely it’s an internal quietness, but it is often expressed outwardly as well. 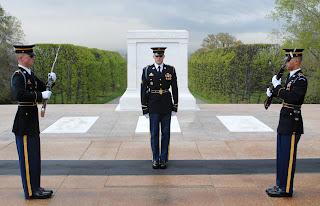 The imagery that reverence evokes for me is somewhat somber and perhaps even old-fashioned. I see the soldiers standing watch at the Tomb of the Unknown Soldier. I think of heads bowed in prayer before a meal. I think of the crowd standing, and men taking off their hats, during the national anthem or the pledge.

In contrast, sometimes it seems like our society is in a competition to see who can be the most irreverent. We live in world that seems to take pride in treating nothing as sacred, to downplay or discredit what others consider sacred. We’ve grown so accustomed to name calling and other forms of incivility that we routinely excuse (if not expect it) from our public figures and hardly even notice it anymore in everyday dialogue. We used to be a society where individuals were considered equals based their significance as being created in God’s image, equally deserving of respect. (“We hold these truths to be self-evident…”) But it appears we’re becoming a society where individuals are equal on the basis of their insignificance, equally deserving of disrespect.

This trend toward downplaying the sacred can be seen in churches as well. Many contemporary churches have distanced themselves as much as possible from their more formal liturgical counterparts. Modern church buildings have more in common structurally with an office building or a theatre than with a cathedral. And modern church services can seem more like concerts or conventions rather than the structured worship times of the past. I'm not knocking contemporary churches - I pastor one! But while it's true that the church is the people, not the building, I can’t help but wonder if we’re missing something by downplaying the consecration of the space itself. What would change if we believed we were standing on holy ground?

And that’s what I set out to discuss this week. I wanted to share a lamentation of sorts for the Lost Art of Reverence. I wanted to tell you how important it is, especially in a climate where rudeness and disrespect seem to be the norm, to be respectful and treat each other with dignity as fellow human beings created in the image of God. I wanted to re-awaken and re-kindle an appreciation of the sacred - both the sacred times (like Sunday mornings and Wednesday evenings) that we’ve set aside for corporate worship, and the sacred places (like our sanctuary) that have been set aside for that purpose. And I wanted to package it neatly under few major points with a call to action at the end! :)

But as I began to organize my thoughts, I quickly realized that this was not going to be such an easy subject to tackle. We may agree on the abstracts, such as the importance of reverence and even the basic meaning of reverence, but see things differently when it comes to the specifics. We may disagree on exactly what is worthy of reverence. And even when we agree on what deserves our reverence, how we express it is greatly influenced by our culture and traditions. 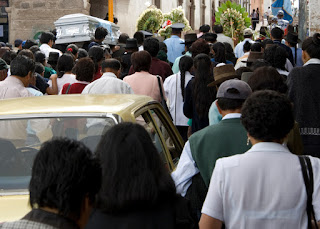 Funerals are a good example of this. Everyone can agree that it is proper to respect the deceased at their funeral. When we attend a visitation or funeral, we even call it “paying our respects!” But sometimes, we pay those respects with very different currency. In some Eastern traditions, professional mourners are hired to weep and wail at a funeral. In some circles, it is expected that visitations and funerals will be conducted in hushed tones, with only quiet tears and stifled crying - and everyone will be dressed up in dark colors. In some parts of Louisiana, especially New Orleans, a band is hired and the somber procession to the graveyard turns into an upbeat celebration after the burial. These seemingly contradictory practices are just different cultural expressions of the same desire to show respect at a funeral.

The problem comes when these different expressions of reverence are in conflict with each other, and we make judgments based solely on that outward expression. Someone whose behavior doesn’t meet our expectations may simply be showing their respect in a different way. And someone whose behavior conforms to our expectations may not have a good heart about it.

Reverence isn’t legalism. It’s a heart attitude, not a set of rules. It would be easier if I could just say “this is how it has to be” and lay out MY set of expectations as if it were Gospel truth. The problem with rules is that you can follow them without involving your heart. You can follow them resentfully, and ultimately break them without any objection from your conscience because they never actually meant anything to you.

But on the flipside, human nature is such that rules and guidelines can be helpful. Sometimes we need to do things that we don’t want to do. As anyone who has ever committed to an exercise plan could attest to, it’s difficult to get started. But when you begin to see results, it gets a lot easier to stay committed. 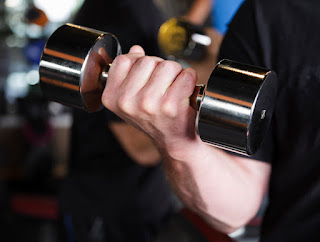 So I want to challenge you to commit to some spiritual “exercises.” I want to challenge you to practice the lost art of reverence. Why? I’ll let Paul answer that: "Physical training is good, but training for godliness is much better, promising benefits in this life and in the life to come." (1 Tim 4:8 NLT) Here are a couple of suggestions, starting points, valuable practices that I believe can help you in your relationship with God. They’re not meant to be taken legalistically… or exclusively. But they could be a good starting point.

PRACTICE reverence towards EACH OTHER. Treat one another with respect. When you’re with someone, be present. (Note to self: "Practice what you preach!") Put down the phone. Watch your words. Don’t gossip. Pray for each other. Remember that even the people you disagree with - even the people who have done you wrong - are made in God’s image.

PRACTICE reverence towards GOD. This includes personal devotions, but I believe it also has to include a reverence for things that are consecrated to God - including the times and places where we gather corporately to worship Him. It includes showing up, even if you don’t really feel like being there. But it's also about being present. Engage in the worship time (even if you don’t like the music style), focus on the message being presented, examine your own heart in light of God's word.

And while the above suggestions may sound like rules, I’d encourage you to treat them like exercise. It might be hard at first. Do as much as you can, and soon you’ll find that you can do even more. And if you’re tempted to use these guidelines to judge others, remember that just like in exercise, critiquing someone else’s push up won’t develop a single fiber of muscle on you! You have to put in the work yourself.

It seems like in church-life we experience pendulum swings from one over-emphasis to another. I’m not trying to get us to swing back to an earlier era of outward conformity. But I do think there’s an inner reverence that can be cultivated which will reflect in our outward behavior.

We live in a hustle-bustle word and people often lament the loss of “the simple life.” Perhaps rediscovering the lost art of reverence, from the inside out, could be a key to regaining the sense of peace many feel has been lost. I believe there’s something within us that longs to connect with the divine. Practicing reverence causes us to slow down, pay attention, listen - and connect. With God and with each other.
Posted by Nathan Martin at 7/27/2016 12:07:00 PM