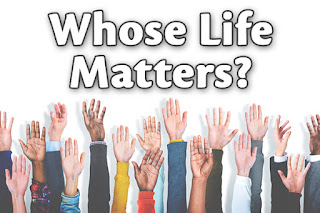 Like many of you, I am shocked and saddened by events unfolding around the country (and here in Louisiana) over the last couple of weeks. Baton Rouge is only 2 hours from me. Dallas is only 5 hours away. I’ve spent a lot of time in both of those cities and know a lot of people in both places, so this hits close to home for me. Maybe too close.


I’m blessed to have many friends in the African American community as well as friends who are Law Enforcement Officers. These are both tight-knit communities that have a strong bond of brotherhood. An injury against one member is felt deeply and personally by the whole group. This bond is very a positive thing when it unites people to comfort and support each other. But it can also be a negative thing if it leads people to see others as “the enemy” and unites them around hatred rather than love. It’s like in a close family where we’re allowed to criticize each other but we won’t stand for it if someone outside of our family criticizes one of us… even if that criticism is warranted. That’s where family feuds come from. And they never end well. (Hatfields and McCoys, anyone?)


There are a lot of people saying a lot of things right now - and not all of those things are helpful. There will always be opportunists who will try to capitalize on high-profile tragedies for their own purposes. I do not condone their messages. And it’s unfortunate, but there will always be some corrupt leaders and law enforcement officers. There will always be some bad actors and criminals and people who embody the worst of humanity from all walks of life. I do not condone their actions. These are the exceptions, not the rule, and I refuse to judge entire races, movements, or professions on the basis of the exceptions.

My heart goes out to all who have been left to pick up the pieces in the wake of these tragedies. They walk a difficult path, and my prayer is that they walk it with grace, wisdom and compassion. I’ve had the opportunity to talk and pray with members of my congregation as well as other pastors and leaders over the last week, people from many different walks of life. There’s a lot of pain, fear, and tension… but there’s also a desire to come together, to pray, to support each other, and to bring healing. That’s encouraging.


However, when I watch the news or look at social media, often what I see discourages me. I see anger and polarization. I see some prominent personalities pitting “Black Lives Matter” against “All Lives Matter” as if these were mutually exclusive ideas. As a pastor, of course I believe that all lives matter. Yet I also see some individuals lifting the “All Lives Matter” banner, not as a rallying point of unity, but as a weapon to beat down and dismiss other points of view. But most of all, I see a lot of hurting people who feel like they’re not being heard. And I see people who are so intent on being heard themselves that they’re no longer listening to anyone else.

In my pastoral role I’m often called to serve at funerals. When there has been a tragic, untimely loss of life, one of the things that brings much comfort to the family and friends is the thought that their loved one’s life meant something. At a time like that, you just don’t walk into a funeral and tell the mourners that there’s a bigger, better, more inclusive funeral next door. Yet that’s what happens when someone responds to “Black Lives Matter” by saying “All Lives Matter.” That’s like saying “Your life isn’t worth celebrating” or “Your story isn’t worth hearing.” The correct response to mourning is to mourn with them…


Here’s the situation - people are hurting. And unfortunately, as the saying goes, “hurting people hurt people.” Those who have been hurt can react out of their pain (or fear of being hurt again) and hurt others. That breeds more fear. Fear clouds judgment. Bad judgment hurts others. It’s a vicious cycle. Fear causes irrational responses resulting in hurt, and hurt distorts reality and creates fear.


This is a complex situation. Per capita it is true that an African American male is more likely to be shot by a police officer than any other demographic group. That doesn’t mean that all police officers are out to get black men. It is also statistically true that police officers are more likely to be shot by an African American male than any other group (again, on a per capita basis). That doesn’t mean that all black men are on a mission to hurt police officers. But it does mean that when a black man and a white officer interact there’s going to be fear and tension on both sides since both parties could believe that their lives are in danger. It doesn't matter if your life really isn’t in danger - if you believe it, it's real to you, and you will act (and react) accordingly.


I believe that listening to another person’s hurt and fear is more important than quoting statistics, because hearing another’s heart is the only way to start the healing process.


When some people hear “Blue Lives Matter,” they feel like one group is being elevated to a privileged status. But I don’t hear them saying that blue lives matter more than other lives. Again, I hear the mourning, the loss, the frustration, the sense of betrayal when a guardian’s life is taken by someone they were sworn to protect and serve.


So when people say “Black Lives Matter” or “Blue Lives Matter,” what they’re expressing is their frustration that these lives don’t seem to matter to everyone. They are calling attention to an injustice that they feel deeply. They want others to care.


We might not want to admit it, but there is an uncomfortable grain of truth here. The people we don’t know don’t matter to us as much the people we know and love. We can say with all sincerity that all lives matter, but we’re not going to mourn someone we don’t know as deeply as we will mourn a friend or family member. It comes down to relationship. If we knew each other better, we would care more. “They” would matter more.

We can start with prayer. Not a cliche, stock prayer that we pray because we think we’re supposed to but don’t really mean. And not a self-promoting prayer like the Pharisee in Luke 18 prayed. We can pray for the safety and wellbeing of all of our brothers and sisters, regardless of skin tone or choice of profession. And remember that prayer isn’t just talking to God, it’s listening - letting Him direct your prayers.


Prayer helps us see others as fellow human beings created in God’s image, worthy of compassion… it keeps their needs in front of us, so we’re not just focused on ourselves. We’re praying for understanding of those with different views. We’re also praying for those that I mentioned earlier - the corrupt, the bad actors, the exceptions, because God told us to pray, even for our enemies! When we pray sincerely for people, God also works in us. And it may be that in praying God will help you see things in you that need to change.


Once you’ve been praying over a situation, you’ll probably start to feel like doing something tangible about it. The next step could be acts of service. If your service is motivated by compassion and not a desire to earn points (or even worse, to make a point), it can be a bridge builder. Sometimes there are obvious needs that we can help meet (like the Holly Oak Cemetery cleanup), and sometimes you have do a little research - a little listening.


Do you want to show someone that their life matters? If you serve them with humility, they will know that they matter to you. Which leads me to my final point.


In order to see real change in the long term, we need to build real relationships. I believe this is ultimately the answer to the problem of us not understanding each other. And this is not something that you can do overnight. Real relationships require real work and commitment. But if you’ve been praying, you’re going to recognize the value in those individuals, which will make you value a relationship with them. And if you’ve been serving with the right heart, doors will open for conversations that can lead to real relationships.


By the way, the perception of inequality based on racial prejudice is not new, nor is the church immune to it. In Acts 6 certain members of the early church felt they were unjustly deprived of a benefit because of their race. There was the perception that the Jewish widows were being favored over the Hellenistic widows in the distribution of food. Whether it was true or not, when the apostles heard the concern they did several key things. First, they listened to the people who felt the offense. Because they were constantly in prayer, they were guided by God to have the people select 7 trusted people who would both hear the concerns and serve with integrity. And thus they ensured that the relationship was strong, that no one felt like their lives didn’t matter!

Over the last 25+ years I’ve had the opportunity to build many friendships across cultural lines. As we’ve built relationships of trust and respect, we’ve shared our hearts and our hurts with each other. We’ve gotten glimpses into each other’s worlds and it has helped us see things from each other’s perspective. We’ve truly come to care for each other. And matter to each other. We don’t always agree on everything. But we listen to each other and that’s what good relationships are built on!


I’m convinced that if we will intentionally listen, pray, serve and build relationships with each other we will no longer have to ask whose life matters. We will matter to each other.