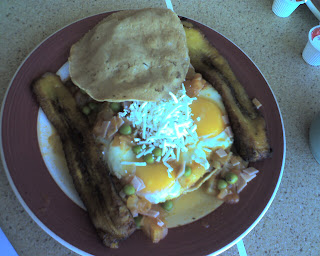 I'm a little late getting this blog out, but I wanted to post about our last day in Mexico. Thursday started with us all packing up and getting ready to leave. Lori and I had a leisurely breakfast at a brand new restaurant overlooking the Gulf of Mexico called California. It's round and all the walls are made of glass so just about every seat looks out over the malecón (beachfront bullevard) onto the Gulf. Beautiful! I had my favorite, "huevos motuleños" - a dish that originated in the town of Motul in the the Mexican state of Yucatan. I used to love "huevos rancheros" as my favorite breakfast dish, but the motuleños have definitely replaced the rancheros, at least on this trip. (Who would ever think of putting green peas on a breakfast dish? And the fried plantains are a touch of genius!!!)

After getting packed up we headed back into town for some last minute souveneir shopping. (I got my shoes shined instead. I also saw some motorcycles for sale on the street - I had to take a picture for my friends in CROP.) We also headed by the famous malecón for a couple more pictures, like this one of a man fishing in the Gulf with a hand-thrown net. Then we headed back to the Agua Viva offices for another wonderful lunch - but not before stopping at my favorite taco stand of all time for a quick "tacos de barbacoa" appetizer! (Thanks, Joel!) Back at the offices, they had taken the flowers from Sunday's service and created even more beautiful centerpieces, making the room stand out with elegance. BTW, the men's bathroom at the Agua Viva offices reminded me of the bathroom in the first apartment Lori and I lived in back in Matías Romero, Oaxaca. You could literally sit on the toilet, wash your hands in the sink and take a shower all at the same time! When I brought Lori down to Mexico, she didn't know what to expect. She thought I lived in a mud hut with a thatched roof, so she was happy to have running water! However, she did spruce it up by hanging a beach towel over the doorway for some privacy. Ah, the woman's touch!
Posted by NathanMartin at 12/08/2008 10:04:00 PM

Thank you taking the time to do this. As I've told you before these blog entries allow me to travel with you. Your narratives put me right there on the street....in the room with you. Thank you for allowing yourself to be used in such a way.

Hi Nathan,
Thank you so much for sharing your trip. I feel like I am there through your writings. The pictures were great. I've looked at them several times. I've only know you for less then a year and I am so proud to learn what you allowed the Lord to do through you. I hope you are able to be apart of the leadership training. Lori, I love the picture of the bathroom. I want to here more when I come to visit in March.
Love
Jenni Y. Michigan