In the "Movie Business"

Hello everyone!
Last week Christian Challenge got into the movie business! We've been using videos in our services for a little while now, mainly for sermon illustrations, but we decided to do our first video recording on our own. This was not for a sermon illustration but a "commercial" to promote our Community Groups.
We got the idea from a video that was posted on GodTube. Rich Carlisle sent me a link and I thought it was pretty good. When I forwarded it to Jenni Baier to see if she could edit out the end and put our logo on it, she suggested that we try to shoot it ourselves. We batted the idea around in our staff meeting and decided to give it a shot. 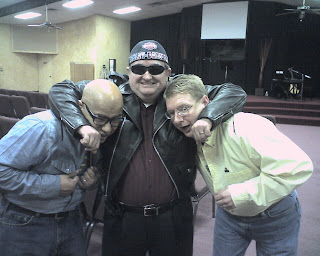 The first question was who was going to play the roles. We instantly thought of Jon Martinez, our youth pastor, as the main character. We thought about Bud Frederick for the last character but he suggested Rich Carlisle, our Community Groups coordinator. Then there was the question of who would play the "bully"? We tossed out the idea of my dad, Buddy Martin, and everyone thought it would be awesome but that he probably wouldn't do it. Believe it or not, he agreed to play the role of the "biker bully"! To the right is a picture of our three "stars" in character!
We got some prop help from Terry Gilcrease who supplied the leather jacket and sunglasses. (Bro. Buddy already had the Harley do-rag! [G]) Jim Ross did the voice-over. I helped direct a bit and Jenni did the filming and editing. All that came out to a pretty decent little production, which you can see below. Definitely not Hollywood, but something we had fun doing. I hope you enjoy:

If you can't see it above, try: http://www.youtube.com/watch?v=UMuSyyqOSl0
Here are a couple more pictures from my cell-phone camera that you might get a kick out of: 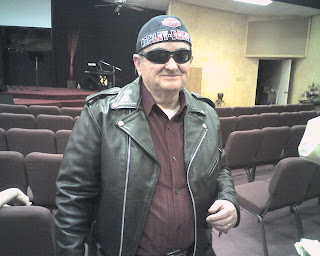 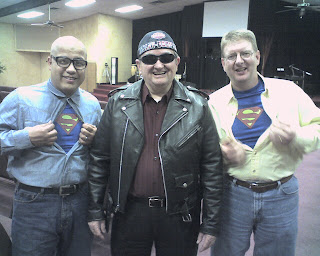 That's it for this update. You never know what's coming next around Christian Challenge! And if you're interested in more information about our Community Groups, check out this link on our website. See you next time!
Blessings,
Nathan
Posted by NathanMartin at 10/02/2008 03:38:00 PM

LOVE IT!!!! I almost fell off my chair laughing! I hope you guys are going to make more in the future. WHAT TALENT!