Hello friends,
Well, the bad news (for me) is that after sitting in the court room all day, I *didn't* get selected to serve on the Jury. They seated a jury of 13 (12 plus 1 alternate) before my name was ever called. I had to sit there through the process, which oddly enough, I really enjoyed! Since I had never been called for Jury Duty before I didn't know what to expect. It was definitely an eye-opening experience. I thought you might enjoy me walking you through steps.
The night before you're supposed to go you call a phone number to get your instructions. I was told to report to Courtroom 3 on the 4th floor by 9:00AM. I got there a little early and mingled with some of the others. I had brought some reading material along, just in case. (Later we were told reading material wasn't allowed, but I think that's during the trial itself, not necessarily during jury selection - although I'm open to correction on that.)
Around 9:00 two bailiffs began taking roll. They had everyone's name and address individually on a slip of paper. If you were present when they called your name your slip was put into a box that they would later randomly draw names from. People who drove more than 10 miles were told to tell them how far they had driven, as they would be reimbursed for mileage. If there were any address corrections, you simply informed the bailiff. Some people had changed their name since they had registered to vote (marriage, divorce, etc) - they were instructed to inform the judge of this in the event they were selected.
Finally the roll call was finished and the box had about 40 names in it from the people who had shown up. (I don't know what happened to the people who didn't show up - maybe nothing?) We waited a little longer and the attorneys for the two sides trickled in and then we were instructed to "all rise" as the the judge came in.
After we settled back in he began by thanking us all for coming and shared how serving on a jury is one of the responsibilities of citizenship that is a bedrock of our democracy. He shared briefly what would be expected of us, if we were selected, and confirmed that this was a civil trial, not a criminal trial. (Apparently being on a criminal jury is more difficult for some people.) At some point during this process he had us all stand, hold up our right hand and swear (or affirm) that we would answer any questions truthfully if our names were drawn as potential jurors. (More on that in a minute.)
Before the jury selection process began he asked if anyone felt like they should be excused from serving. A few people made their way up to the front and spoke with him individually. A couple of people were excused, but most came back to their seats, obviously not having convinced him of the legitimacy of their excuse!
Then the selection began. Slowly 14 names were pulled from the box and announced, calling the individuals to go sit in the jury box. After they were all seated the group was called up once again to swear, or affirm, that they would answer truthfully. The the judge began asking each individual a series of questions, some longer than others depending on their answers. This took a long time as each person was asked the following:
Obviously it took a LONG time to go through 14 people, asking them individually these questions. Then each of the attorneys got up in turn, briefly stated their summary of the case and proceeded to ask follow-up questions of the potential jurors, obviously trying to determine the kind of juror the person would be, and if they would have a leaning towards their side of the case. As the people answered you could sort of get a feel for if an attorney "liked" that juror or not. In my mind I figured at least three of the potential jurors would not be selected.
After each lawyer had asked their questions the judge called a brief recess to meet with the attorneys in his chambers. After about 10 minutes they all returned and the judge began with the first person, telling them they were either accepted or dismissed. Of the 14 potential jurors, 8 were accepted and 6 were dismissed, including the 3 I thought wouldn't make the cut, for whatever reason.
By then it was close to noon so they drew 14 more names and then told everyone to break for lunch and come back at 1:15. When we met back we were told they needed 6 more jurors from the next 14. (Apparently during lunch one of the attorneys had used his discretion to dismiss another of the previously accepted jurors.) So we started the process all over again - the individual questions from the judge and then each attorney. By this time, I knew a lot more about the lives of 27 strangers and 1 acquaintance than I ever imagined!
Finally the questioning ended, the judge and attorneys recessed to chambers and when they came back the judge began going down his list. Again I had correctly predicted who would be dismissed and they made it all the way to number 11 when they decided they had gotten the additional 6 they needed. The judge then thanked the rest of us and told us we were all dismissed and were free to leave. The bailiffs stamped the parking garage permits for those who needed it and we began filing out, most happy to be free - except for me! I never even got my name drawn to be considered! But I enjoyed the process. 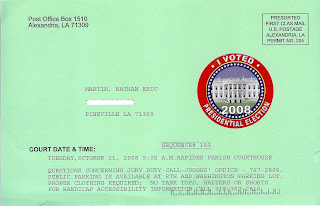 The day was not a complete waste, though, because it was the first day of "early voting" and I decided to excercise my other "sacred duty" and vote. I had pretty much made up my mind who I was going to vote for and had previously glanced at the 7 constitutional amendments so I was somewhat familiar with them. I used my trusty Treo 700p to go on the Internet to PAR's website to read their synopsis of the amendments and marched into the voter's registration office. Earlier the line had stretched way down the hall, snaking back on itself, but by now there were only a few people in line in front of me. The ladies working there told me over 800 people had voted so far that day, which indicates a pretty heavy turnout! After I voted, I proudly put on the "I Voted 2008 Presidential Election" sticker they were giving out, which I later attached to my Jury Duty summons as a momento of the day I participated in TWO of the most important responsibilities of any citizen - jury duty and voting!
Hopefully this synopsis of the jury selection process will help someone else who gets one of those lovely notices in the mail. It's not a scary thing - and it's a wonderful opportunity for you to serve your country. It's important for the continuation of our freedoms. So don't forget to vote, even vote early (but not often! [G]) and when called upon to serve as a juror, do so with a sense of pride and patriotism. Not many nations enjoy the freedoms we have, that are continued by our participation in these important institutions. Until next time!
Blessings,
Nathan
Posted by NathanMartin at 10/22/2008 05:27:00 PM