Be Thankful for the Church 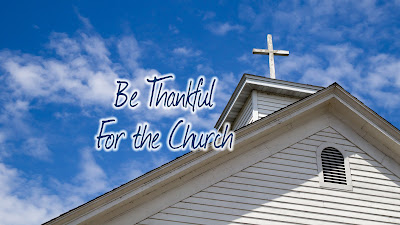 In the book of I Thessalonians, Paul is writing to a local church he started. The establishment of the church is recorded in Acts 17:1-9. On his second missionary journey, Paul and his companions (Silas and Timothy) had just left Philippi and passed through Amphipolis and Apollonia to arrive at Thessalonica. As was his custom, Paul immediately located the synagogue and reasoned with the Jews for three Sabbaths concerning Jesus Christ. While some of them were persuaded, including a great number of devout Greeks and leading women, the unbelieving Jews became jealous and created an uproar in the city. That gives you some background for Paul’s letter to his friends in Thessalonica. Let me share a few things I’ve learned from Paul’s letter and attitude.

Give Thanks for the Peace of the Church 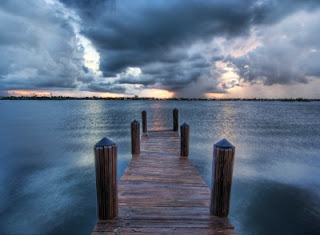 The letter opens with the words, “Paul and Silvanus and Timothy, to the church...grace to you and peace." (1 Thes 1:1a NASB) Did you notice that Paul just uses his name, and doesn’t include any title or explanation of his position as an Apostle? Some say that this was because there was no major criticism of Paul or his authority in the Thessalonian church. In most of the other churches Paul wrote to, there was dissention and criticism of his authority, so he often had to spend some time reminding readers of his unique calling. Sadly, criticism seems to be the rule rather than the exception. Jesus experienced it. Paul the other Apostles and church leaders experienced it. And modern day church leaders have to deal with it as well.

It’s become almost trendy to criticize believers these days. That doesn’t mean that sometimes we don’t deserve some criticism (in my Facebook Bible Reading group, we’ve been talking about the importance of genuinely mourning for our sins). But often, people criticize not to bring about repentance and change, but to justify their own decisions and bad attitudes. Flawed as it was (and still is!), Paul believed in the local church. Even the churches that criticized him and gave him a hard time. Those who say they are believers yet don’t fellowship in the local church, are not following Paul’s instruction, teaching or example.

The Church ought to be a place of peace, but it’s important to remember that this peace does not come from the Church. It comes from “God the Father and the Lord Jesus Christ” (vs 1b). That’s why Paul could open all of his letters, and sometimes close them, with a prayer for “grace and peace” for the readers, regardless of the circumstances.

Phil 4:7 says, “And the peace of God, which surpasses all comprehension, shall guard your hearts and your minds in Christ Jesus.”

Thank God for the supernatural peace that belongs only to the Church!

Give Thanks for the Projects of the Church 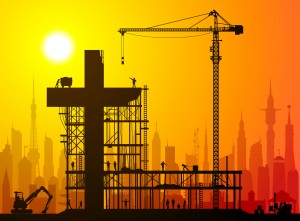 In his opening prayer, Paul says that he is “constantly bearing in mind your work of faith and labor of love and steadfastness of hope in our Lord Jesus Christ in the presence of our God and Father” (1 Thes 1:3 NASB).

Paul mentions their work of faith. The word used for “work” there is ergon, which means “to work or accomplish; toil (as an effort or occupation); by implication, an act or deed.” This is something they did, not just as lip service, not as passive recipients, but something that required some effort. The Church was active in their faith.

Paul also calls it a labor of love. A labor is difficult. It implies pain, toil, difficulty, and weariness. It’s easy to love others when it doesn’t hurt us. But Paul is grateful for the Thessalonians’ labor of love. Their love was accompanied by action, even when it would have been more comfortable for them love from a distance. They were living out what the Apostle John wrote: “Little children, let us not love with word or with tongue, but in deed and truth.” (1 John 3:18 NASB)

He also praises their steadfastness of hope. Steadfastness is patience and endurance. Biblical hope is a confident expectation. This isn’t a casual kind of hope, like when say, “I hope it doesn’t rain tomorrow.” This is a deeply anchored confidence in our faith.

And what are the results? The gospel is advanced! “For the word of the Lord has sounded forth from you, not only in Macedonia and Achaia, but also in every place your faith toward God has gone forth, so that we have no need to say anything.” (1 Thes 1:8 NASB)

Thank God for the supernatural projects that He accomplishes through the Church!

Give Thanks for the Power of the Church 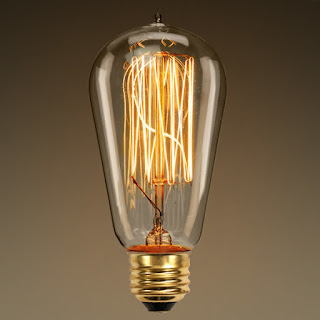 The Thessalonians were no strangers to God’s power. Paul says, “for our gospel did not come to you in word only, but also in power and in the Holy Spirit and with full conviction” (1 Thes 1:5a NASB). God is at work in the church at Thessalonica, and it didn’t depend on Paul’s eloquence or the Thessalonians’ goodness. In verse 7 we learn that through God’s power they became an example to all the believers in their region.

People heard about the power of God at work in the Thessalonians. Paul writes, “For they themselves report about us what kind of a reception we had with you, and how you turned to God from idols to serve a living and true God, and to wait for His Son from heaven, whom He raised from the dead, that is Jesus, who rescues us from the wrath to come.” (1 Thes 1:9-10 NASB).

The testimony of one person who has turned from a life of sin to follow God is certainly powerful. But the testimony of an entire congregation walking out their faith in the midst of opposition and adversity can’t help but have far-reaching effects!

Thank God for the supernatural power that He demonstrates through the Church!

I am thankful for each of these things in the life of my church, Christian Challenge, and I hope you can say the same for your home church, wherever that may be! In fact, I’d love to hear what you’re thankful about concerning your church! Why not brag a little and share why you love your church? And I’ll be thankful right along with you!
Posted by Nathan Martin at 3/16/2017 11:54:00 AM