Old Carols in a New Light #1 - Joy to the World

Back in December, 2007 I did a little 3-week sermon series called "Old Carols in a New Light." My goal was to explore some much-loved carols and help folks see the beauty in songs that sometimes are so familiar we lose sight of the truths contained within. Little did I know that would become one of my most looked-forward-to sermon series each year! This year at Christian Challenge Worship Center I’ve chosen to take an in-depth look at just one carol for the whole series - and it's one of the most beloved and oft-recorded Christmas Carols of all time: "O Holy Night." I began with the first verse this past weekend and will cover the next two verses over the next two Sundays. But in thinking about the blog, I thought how much fun it would be to revisit some of the carols I've taught on in the past! So for the rest of this month, I’ll be doing a series here on my blog on Old Carols in a New Light, based on the Christmas sermon series I began back in 2007. It seems appropriate to begin the web series where I began the sermon series 9 years ago with the much loved carol entitled Joy To The World!

Isaac Watts, the Author of Joy to the World 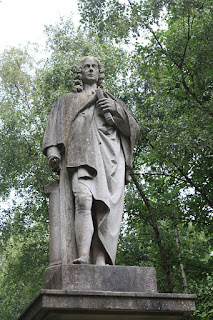 Isaac Watts was born in 1674 in Southampton, England, the first of 9 children, to a humble home. His parents were part of the “dissenters,” a movement that practiced non-conformity to the Church of England. As a result, his father spent some time in jail for his sermons and statements against what he viewed as faults in the Church of England.

Isaac showed a quick wit for prose. When he was a child he often got into trouble for opening his eyes during prayer time or for laughing during family devotions. He said he saw a mouse climbing the bell tower rope and wrote the following description:

“A mouse for want of better stairs, Ran up a rope to say his prayers.”

Supposedly he got in quite a bit of trouble for this and wrote the following:

“O father, do some pity take
And I will no more verses make.”

In the 1600s, many believed that the only songs that should be sung in church were the Psalms. They thought that God had inspired David and the writers of the Psalms and that only their words were worthy to be used in worship. This was the official position of the Anglican church. The words of the Psalms were put to tunes of the day for use in worship and there was no other option.

But the non-conformists had a different perspective. They believed that since one could pray to God spontaneously and not in the exact words of Scriptures, the same should be true for expressions of worship. Isaac Watts himself is quoted as saying that though “the ancient writers were to be imitated, they were not to be copied.” He also said that the forced tunes the Psalms were sung to often sounded like a rusty saw was being sharpened close to his ear!

Thus, many new hymns began to be written to express the truths of scriptures in rhyme and the language of the day. But some of these lacked quality. When young Isaac complained to his father about some of the songs, his father challenged him to do better. And so he did! Each week he composed a new hymn to go with the sermon, first with his father’s sermons and later with his own sermons as he became a pastor. 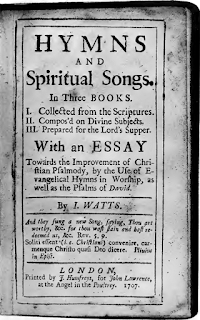 He wrote over 700 hymns throughout the course of his life, including “When I Survey the Wondrous Cross”, “Alas! And Did My Savior Bleed?” and “Our God, Our Help in Ages Past.” He is called the father of modern hymns. His music is known both for its beauty and for its strong ties to biblical truth. He didn’t just write better music for Christians to use in worship, he wrote songs that shared the gospel using memorable lyrics and imagery. Here’s an excerpt from one of his lesser known hymns:

Not all the blood of beasts,
On Jewish altars slain,
Could give the guilty conscience peace,
Or wash away the stain.
But Christ the Heavenly Lamb
Takes all our sins away;
A sacrifice of nobler name,
And richer blood than they…
Believing, we rejoice
To see the curse remove;
We bless the Lamb with cheerful voice,
And sing His bleeding love.

It is said that a young Jewish girl read these words on a piece of paper that had been wrapped around a block of cheese she bought. She could not shake off the impression produced by the striking words; so she obtained a Bible and read it eagerly. She soon found in Jesus her true Messiah and Lord.

Jesus, the Message of Joy to the World

Like Watts’ other hymns, Joy to the World also has a strong evangelistic message. If you see "Joy To The World" as a just an upbeat Christmas carol, you’re missing out on the theological riches in its verses. Let’s take a look at a few things that jump out to me, starting with the first verse:

Joy to the world! The Lord is come.
Let earth receive her King
Let every heart
Prepare Him room
And heaven and nature sing... 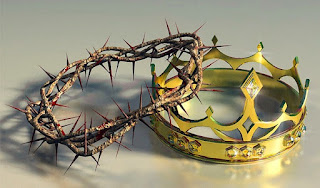 But this verse doesn’t stop at proclaiming the coming of the King. It also appeals to men everywhere to make room for the King. Every heart only has enough room for one king. (This is why I LOVE the Spanish song, “Ven y toma el trono de mi Corazón” which translated means “Come and take the throne of my heart!”)

The third verse of the carol begins this way:

No more let sins and sorrows grow,
Nor thorns infest the ground;
He comes to make His blessings flow
Far as the curse is found...

Have you ever wondered why the Gospel is called “Good News”? Because the world we live in is full of bad news. The bad news is the Curse. With a capital C. Look at it: Gen 3:16-19 ...

“I will greatly multiply
Your pain in childbirth,
In pain you will bring forth children;
Yet your desire will be for your husband,
And he will rule over you.”

17 Then to Adam He said, “Because you have listened to the voice of your wife, and have eaten from the tree about which I commanded you, saying, ‘You shall not eat from it’;

Cursed is the ground because of you;
In toil you will eat of it
All the days of your life.
18 “Both thorns and thistles it shall grow for you;
And you will eat the plants of the field;
19 By the sweat of your face
You will eat bread,
Till you return to the ground,
Because from it you were taken;
For you are dust,
And to dust you shall return.”

And just how far is the curse found? According to Rom 8:19-22 the curse affected the whole world. The  whole of creation is longing for redemption from the curse, which is proclaimed by this wonderful carol! But please note that His blessings flow to those who have made room in their hearts. And the curse is removed in Christ (Gal 3:13) and will ultimately be removed from the whole earth (Rev 22:3). 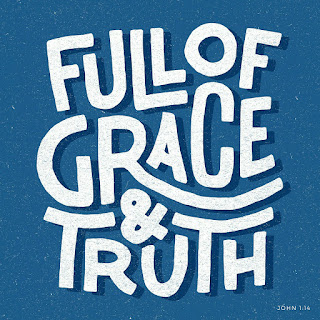 In its final verse our carol draws to conclusion by pointing out that in Christ, grace and truth work together.

He rules the world with truth and grace,
And makes the nations prove
The glories of His righteousness,
And wonders of His love...

We need the truth. We need to see things as they clearly are. We will never deal with the issues of our life until we see the truth. Did you know that’s why the Law was given to us? To expose our hypocrisy, our self-righteousness, our utter failure at being worthy of eternal life (Gal 3:19). It’s like the little boy who saw the emperor had no clothes. Without the truth, we all parade around like pompous Pharisees, congratulating each other on how pretty we look. And the truth is, we stink! The Law exposes our nakedness.

But it doesn’t stop there. I’m so glad the song includes both truth and grace! Because sometimes, just like that line from the movie, “We can’t handle the truth!” If He only ruled by truth, I’d be dead! Truth is, I don’t deserve His love. Truth is, I’ve let Him down so many times I’ve stopped counting. Truth is, I should not be included in His family. But the song says  “truth AND grace.”

John 1:14 tells us that Jesus was “full of grace and truth.” And John 1:17 goes on to say that “grace and truth were realized through Jesus Christ.” The Law is important. It reveals the truth about our sinfulness, our inability to correct ourselves, the effect of the curse. But what the Law could not do, God did in Jesus (Rom 8:3). THIS is the message of “Joy To The World!”

What a great song!
I don’t think Isaac Watts intended this song to be kidnapped and held hostage to the Christmas season. This is a song of great joy the whole year long. It’s one of the finest missionary songs ever sung! It’s a song of hope, the message of joy and love replacing sin and sorrow. It is the Gospel!


Let me close by asking you a few questions: Have you experienced the message of “Joy to the World?” Has your heart prepared Him room? Is He reigning in your life? I pray that you can answer “Yes!” to every one of those questions and that you find His blessing flowing where the curse was once found. May you have JOY this Christmas season, and all year ‘round!
Posted by Nathan Martin at 12/07/2016 05:05:00 PM