Whew, what a day!!! Joel and I just got back to the hotel from a wonderful day of ministry at Day 2. Over 400 pastors and leaders attended the conference, representing more than 60 churches from the southern part of Mexico. What an honor to have their trust to come to Agua Viva and receive leadership training. I thank God for the relationships and connections He's brought to us. 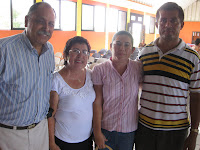 I want to share a couple of stories with you. Recently I shared a message at Christian Challenge about the persecuted church in Nepal, Pakistan and other parts of the world. But the persecution is also much closer to home than many of us realize. Many pastors in Latin America have received death threats from the narco-traffickers and some have been kidnapped or murdered. The couple pictured at the right received death threats this week and his uncle (who is also a pastor) was kidnapped and is being held for ransom. Please pray for Manuel and Susana as they walk through this difficult time. Even though they have received death threats, they are not backing down from preaching the gospel. 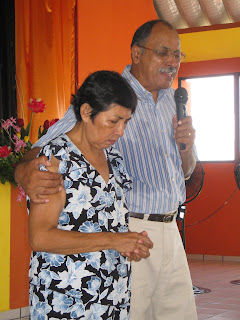 The dear sister at the left, standing with the conference organizer, Mario Tagle, was co-pastor with her husband for many years. He attended the first leadership conference that Joel taught at back in March but he passed away two days ago. Yesterday she buried her husband and today she came to the leadership training. Mario led us in prayer for her and their church. I admire her service and dedication.

We had over 400 leaders from 60+ churches at the conference (the numbers are still being finalized). It amazes and humbles me that Joel and I could be used of the Lord to touch so many lives down here. Something so small that began in 1988 has now flourished into not only several Agua Viva churches, but the ability to influence hundreds of leaders in so many churches. It's truly an honor to be a part of this, extending the Kingdom of God in southern Mexico by joining hands.

I've uploaded some pictures to my Flickr account that tell the story, perhaps a little better than these words. Check it out here.
Tomorrow's our final day. Joel will preach in the morning service at Agua Viva then we'll head for the airport after lunch. We'll arrive in Dallas tomorrow night and then home on Monday. Thanks again for your prayers and support. I'm a blessed man to have you in my life.
Blessings,
Nathan <><
Posted by NathanMartin at 10/03/2009 06:57:00 PM