Our local police department has recently been armed with a number of X-26 Tasers from Taser International. This new weapon will allow Pineville police officers to potentially "take down" a suspect without having to shoot him. This provides a level of protection for the officer because he doesn't have to get in close contact to use his baton or pepper spray. This also is safer for the suspect because being shot with a real gun is no fun. 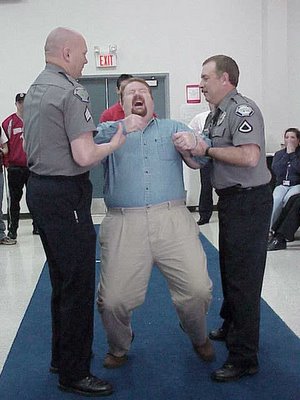 In order to be "checked out" on the X-26 Pineville's officers had to be shocked themselves so they would know what it is they're putting someone through and won't use it lightly. Somehow the suggestion was made that City Councilpersons might want to "experience" the Taser first hand. Since I went through the "burning house" scenario with the fire department, fully suited, wearing oxygen, etc, as a way of showing support for the fire department, I felt I should demonstrate my support for the police department as well. So I volunteered.

Nothing can prepare you for the sensation of being hit with 50,000 volts of electricity. I'll admit I was scared. But when it hit, as you can see in the photo, all I could do was scream! Actually, I thought I was screaming but the people around me said no sound came out. Every muscle in my body tensed up for the duration of the charge and I could do nothing but wait until they stopped pulling the trigger. When it was over, I almost collapsed (and would have if it hadn't been for the fine officers holding me up). I felt like I had run a marathon. Every muscle in my body was sore. In fact, for over a week afterwards my back ached and even now, a couple of weeks later, I feel a twinge when I write this (and when I see the picture).

So, what is my advice to anyone confronting a Taser? Do what the man says!!! If the police tell you to stop ... STOP!!!