When We Mess Up 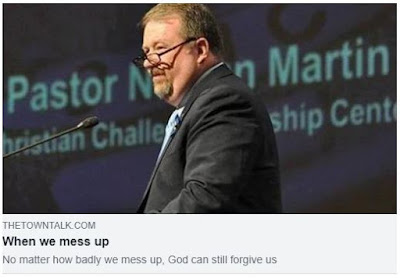 (This column originally appeared in the Town Talk on Sunday, August 8, 2018.)

One of the common occurrences of the human condition is that we mess up. No matter how hard we try, from time to time we just blow it! We miscalculate, we procrastinate, we overestimate – and the result is we let someone down in a big way.

The Bible doesn’t hide the stories of failure of even its biggest heroes. Rather than sugarcoat their lives with pretend perfection, the Bible paints vivid pictures of passionate, alive men and women who live life loudly, and sometimes mess up loudly as well!

Peter is one of those passionate protagonists whose story makes us all feel a little better about ourselves. If any of the apostles were going to put his foot in his mouth, it would be Peter! He was quick to judge, quick to offer an opinion, even quick to rebuke Jesus Himself when he thought Jesus was wrong.

But on the biggest night of history, the night Jesus was betrayed, arrested, tried, and condemned to die, Peter made his biggest screw-up of all! When given the opportunity to stand with Jesus, which he had so boldly declared he would do, he denied ever knowing Him. Not just once, but three times! (And the third time he included some choice words to get people off his back!)

That was when he knew he blew it! Luke 22:61 tells us that after Peter’s 3rd denial that Jesus turned and looked at Peter. And that’s when Peter knew he’d blown it. The next verse tells us “he went out and wept bitterly.”

But thank God that Jesus doesn’t leave us in our failure! After Jesus rose from the dead Mark reports that He specifically sent word to Peter to meet Him in Galilee (Mark 16:7). And when Jesus met them on the seashore He made sure to get across to Peter a very important message – that not even his failures could separate him from God’s love!

The scene was carefully set. Just like the night that Peter had denied Jesus there was a charcoal fire. And just as there had been three opportunities to acknowledge Jesus, Peter is now asked three times, “Do you love Me?” (See John 21:1-19 for the full treatment.)

Serious students of the Scriptures recognize that Jesus used a Greek word for love (“agape”) and that Peter responded with a different Greek word (“phileo”). It’s as if Peter couldn’t accept the restoration Jesus was pouring out on him. So the third time Jesus asked the question, He used Peter’s word, “phileo” – fully coming down to Peter’s level in order to lift Peter back up again.

Paul understood this when he wrote about the “God of all comfort, who comforts us in all our affliction so that we will be able to comfort those who are in any affliction with the comfort with which we ourselves are comforted by God.” (2 Cor 1:3-4 NASB)