Thursday is my "study day" to prepare for Sunday. Often I'll kick off the day by bringing a book to breakfast at some local watering hole and lingering over a low-carb breakfast while reading a bit. Back on April 30 I was reading Bill Hybel's "Axioms" and in that day's reading he was talking about the importance of a leader having and communicating vision.
I put the book down and began to quietly pray about that topic. I told the Lord I wanted to clearly understand His vision for my life and ministry. I shared that the lives of the 200+ people He's entrusted to my spiritual care are too important for me to just "wing it." I told Him I needed Him to lead me like He led Moses, very clearly. Moses had a pillar of cloud by day and a pillar of cloud by night to lead him. For Moses there was no mistaking God's guidance.
About that time I glanced out the window of the restaurant (Huddle House, for the record - I had the Western Omelet) and saw a yellow Goldwing motorcycle in the parking lot. Just earlier in that week I had commented to someone that I'd love to have a yellow Goldwing because they're easier for others to see. (Many motorcycle accidents happen because other drivers just don't see the motorcycles. Please watch out for my two-wheeled fellow-bikers out there!)
As I looked at that yellow Goldwing I said to the Lord, "I need something easy to see, something clear to follow, like that yellow motorcycle. I need you to lead me as you led Moses because the lives of these people are too precious for me to make a mistake." I'll confess to a sense of melancholy as my eyes misted and I thought of the enormous responsibility of caring for the spiritual well-being of others.
I don't know how long I sat there but before long my phone vibrated, informing me I had received a text message. I glanced down and saw it was a "tweet" from my best friend, Joel Dyke who pastors Life Church West Monroe. (A "tweet" is a message sent out via the Twitter.com service to all your friends who subscribe to your "twitter feed". Mine is http://twitter.com/NathanCCI.) Joel had sent the following tweet to all his friends: 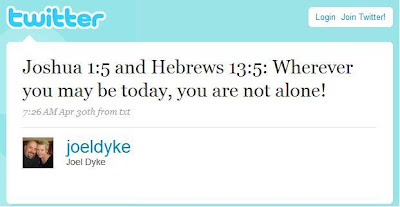 I was definitely moved as I saw the message, "You are not alone!" I thanked the Lord for the timeliness of this message and for assuring me that I was not alone in leading His people. At least that's how I took it. Then I decided to read the scriptures Joel had sent. Imagine my surprise when the first scripture I read said:

"No man will be able to stand before you all the days of your life. Just as I have been with Moses, I will be with you; I will not fail you or forsake you."(Josh 1:5 NASB emphasis mine.)

Tears began flowing down my face as I realized God had directly answered my prayer from a buddy 100 miles away who had no idea what I was asking the Lord in that moment. God had prompted him to write that to all his friends and send it out randomly, but it was the exact answer I needed. I was asking God to lead me as He had led Moses and the answer came, "Just as I have been with Moses, I will be with you." Wow!! 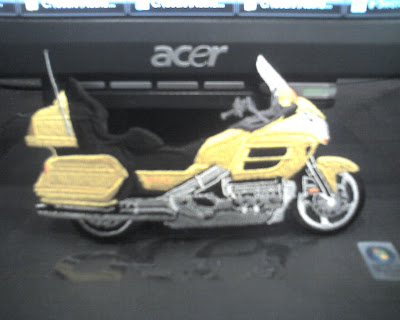 That same day I made my way to a motorcycle accessories shop and purchased a yellow Goldwing patch, which I keep on my desk, right under my computer monitor, to remind me of this experience and God's promise to clearly lead me ... like a yellow motorcycle!
I wrote the date on the back of the patch (4/30/09) and the scriptures that were in Joel's tweet-message. I don't know that I'll ever own a yellow Goldwing. (The second verse said to "make sure your character is free from the love of money, being content with what you have" so I'm very happy with my 1986 burgundy Goldwing!
Blessings,
Nathan
P.S. I shared this story the following Sunday in my sermon and have shared it with a few folks in conversation as a way of encouraging them to trust God for His clear leading and to listen for His voice and it's been very encouraging to many. Once couple shared with me that they had prayed and made a decision about purchasing a house and right after that making that decision they saw a yellow motorcycle and remembered the story. Last week my van was giving me problems. I had taken it to a mechanic and was following his advice to get a specific part replaced. I was on my way back talking on the phone to a friend, explaining the hoping that the problem was fixed, hoping the mechanic was right. I made the statement, "I need a yellow motorcycle" and right then a yellow chopper flew by me on the expressway! I'm not telling you to go make decisions based on seeing yellow motorcycles! I just want you to trust God that He will guide you as you listen to His voice! :)[GRIN]
Posted by NathanMartin at 5/23/2009 03:49:00 PM

Thanks for sharing this story. I look forward to all of your blogs. This one I will be printing out and hanging on the Fridge for all my family to read. I have a yellow motorcycle story of my own. It was a found 20 dollar bill laying in the grass on a windy day. It was a time when I needed to know that God knew where I was and what I needed and he gave me what I needed to keep trusting Him. He is so awesome!!!

Thanks for sharing that, Jenni. It's encouraging to hear how the Lord has spoken to others. God know EXACTLY how to speak to us when we need to hear it. Sometimes it seems we're not ready. My goal is to live ready to hear it!!! Thanks again for sharing!