Time for a new keyboard? 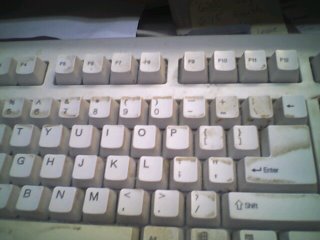 Here's a pic of my keyboard ... or at least the one I just replaced. As you can tell, it's well used! Probably a little TOO well-used.

LOL! My keyboard, besides holding dust, has the letters missing from several keys- about 13 either entirely or partially missing. Same thing had happened to my old one. Not sure what I am doing or if there was a defect in the keyboard (happened on my newer one soon after I bought it).

Thanks for the comment, Lois. Looks like you use certain keys quite a bit as well! Since it happened on two different keyboards, I would suspect the user not the product! [G]

BTW, my arm is doing MUCH better since I've been using the new ergonomic keyboard. MUCH better!

But what about the old keyboard? What does it's future hold? Will it be relegated to the junkpile of life, tossed aside like so much of our throw-away society? It still has some usefulness left, doesn't it?


You teased us with these questions but then left us hanging, Nathan! Now I’m sitting here up at midnight, reading your blog and I’m thinking to myself, “How will i ever get to sleep?”

Please, for the love of crawdads, what happened to the old keyboard?

Donna, I'm sorry that your comment got stuck in moderation purgatory! I didn't see it until just now. So here I am, three years later, approving it and responding. And trying to remember what I did with that old keyboard 16 years ago! LOL. I'm pretty sure I threw it away as it was really beyond hope. That was the contrast I was trying to make when I said I'm so glad our Lord doesn't throw us away when we're dirty and used up. Unfortunately I threw the old keyboard away. I'm just glad Jesus doesn't throw US away when we feel used up and broken!